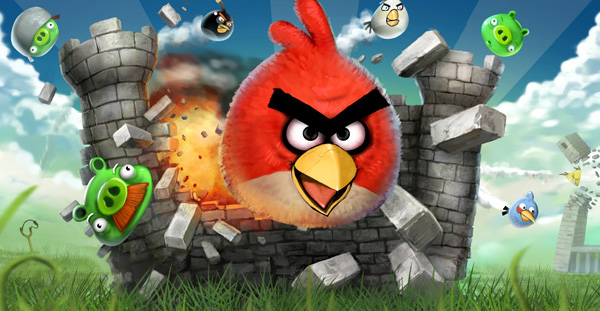 Last night, an update to Angry Birds HD dropped on iPad with fifteen new levels, a new golden egg and a “feature” that has immediately angered loyal fans – adverts. No, not the unobtrusive types of an AdMob or AdSense variety seen in some apps. In Angry Birds HD, a “news section” – a nicer word for advertisements – hits gamers in the face upon reaching the pause screen.
It pitches the official merchandise, forcing gamers to wait for the promotional animation to finish, thus hindering their ability to restart the level and resume the game as quickly as possible. The move backfired as agitated fans began posting despicable comments in iTunes reviews. Here’s what one avid fan wrote:

This impacts the time to restart the level and continuous fade-in animation is very distracting. Now we’re forced to wait until the news loads EVERY SINGLE time the game is paused before restarting. Serious players will now have to wait an extra second or so each time a level restart is required.

Another person made it clear he or she would have given the game a five-star rating if it weren’t for adverts. “I buy apps to get rid of ads not to get bombarded with more”. A third poster rightfully observed that the update “really gives you the feeling that someone lowered the quality control bar and chose to add a poorly placed… and tacky-looking… advertisement on the pause / menu screen to push Angry Birds gear.”
Now, this is interesting. Developer Rovio revealed in an in-depth Wired feature that Android users downloaded twenty million copies of ad-supported Angry Birds plus as much paid downloads on the iPhone and iPod touch. Their spokesperson Ville Heijari said both generate similar revenues., which caught my attention. It kinda proves that even though the legions of Android users reluctantly buy apps, it is more than possible to make up for lost revenues with a greater focus on an ad-supported model on Android.
0
SHARES
FacebookTwitter
GoogleLinkedinPinterestWhatsapp