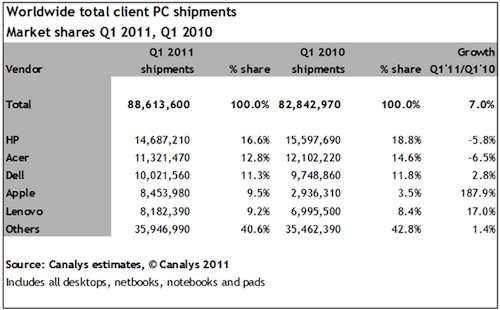 WIth the iPad being added to the mix, Canalys calculates Apple’s year-over-year growth for the quarter at nearly 188%, but down 31% from the previous quarter.
Apple continued with its strategy to dominate the pad market, with the iPad or iPad 2 available in 59 markets by the end of Q1. A combination of strong Q4 sales and the announcement of the iPad 2’s launch across major markets at the end of March contributed to Apple’s iPad shipments being down 31% sequentially. The full impact of the iPad 2 launch will not register until subsequent quarters, as Apple gets the product into the hands of consumers. While pad sales continued to lift Apple’s results, PC vendors with a focus on the consumer netbook and notebook market, such as Acer and Asus, did not fare so well.

Canalys reports that a total of 6.4 million “pad” devices were shipped during the quarter, with Apple accounting for 74% of the total.