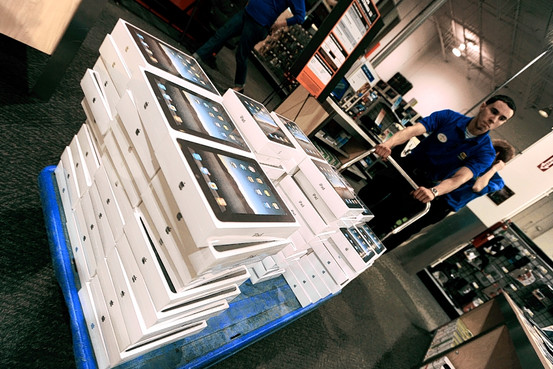 The rumor at Forbes is that Best Buy is going to buy each of its employees in its 1100 US locations an iPad as part of its Connected Store program.  That in itself is significant, if true.  Best Buy has sold the iPad since its inception last year and the program would not only sell lots of iPads to Best Buy, but it would also give the Apple tablets much more exposure in a more and more crowded tablet space.

A source with knowledge of corporate mobile device deployments tells Forbes that one of the country’s top 10 largest retailers expects to distribute iPads to each of its on-floor sales associates. This retailer, the source adds, operates 1,100 stores across the U.S. As the country’s largest electronics retailer — as well as a retailer that currently operates around 1,100 stores in the U.S. — Best Buy is a natural match.

It would be even more interesting is if Best Buy used those iPads as Easy Pay systems like those of GAP and of course Apple Stores. iPads have been showing up as Payment systems all over the place in the year since its launch so it seems like a great idea to us!
0
SHARES
FacebookTwitter
GoogleLinkedinPinterestWhatsapp