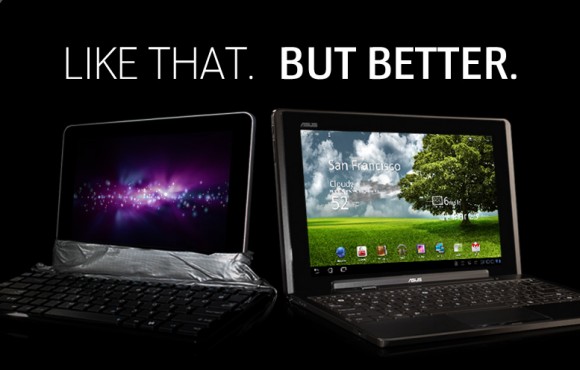 Someone from Apple is going to pick up the phone and yell at Best Buy over this stunt. Oh wait, somebody already did. Asus is to blame here, really. Wanting to create a buzz around its Android-driven Eee Pad Transformer tablet, lousy marketeers came up with this stupid iPad bashing idea, a telling sign of the lack of creativity.
The Android Spin blog first spotted the offending banner which was taken down shortly, most likely after a complaint from Apple. It depicted an iPad lookalike duct-taped to a keyboard with light lettering that read “Like That.” Right next to it was a Transformer, with the “Only Better.” tagline in strong typeface.
When you start trashing a competitive product that’s by far best-selling in the category, it’s a pretty telling sign of your own inadequacies…
What Asus is basically telling us here is that those needing a full-fledged notebook rather than a tablet are better off with their pricey slate just because an extra battery and a dockable keyboard make it a “notebook”, right? Am I missing something here?
If Asus CEO Jerry ShenI approved this advert, maybe he ought to begin dusting off his resume. What, you haven’t heard of the wrath of the iPad?
0
SHARES
FacebookTwitter
GoogleLinkedinPinterestWhatsapp