Reuters reports that the early lines for Apple’s new iPad mini seem to be shorter than for previous product launches. They note that about 50 people waited at the Apple Store in Sydney, Australia and about 100 or more outside Apple Stores in Tokyo and Seoul. Reuters notes that in the past, the line at the Sydney store “stretched for several blocks” for iPhone launches. 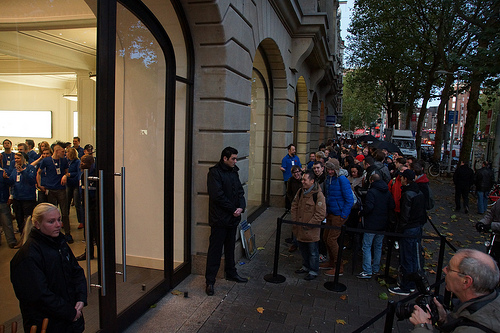 Amsterdam Apple Store / Image by Floris Looijesteijn
Lines were certainly forming in several locations such as Amsterdam (above), as well asMunich and Florida, though the Covent Garden Apple Store reportedly attracted very few customers this morning. The line to Apple’s flagship 5th Avenue store also started forming quite late, though launch enthusiasm in New York was certainly tempered due to the devastating effect of Hurricane Sandy on the city earlier this week.

The iPad Mini was available for pre-order starting last week and persisted in availability throughout last weekend. Apple is also launching the 4th Generation iPad today. Both products should be available at retail stores starting at 8am this morning. Of note, the LTE / Cellular enabled version of the iPad Mini will not be available until Mid-November. Only the Wi-Fi version is available today.