According to a survey done by Nielsen, U.S. consumers aged 6-12 are significantly more interested in purchasing Apple’s iOS products over the next 6 months. The new Nintendo Wii U took the #2 spot, but lagged well behind the iPad. Meanwhile, the iPod Touch, iPad Mini and the iPhone rounded out the rest of the top 5 most wanted products for this age group. 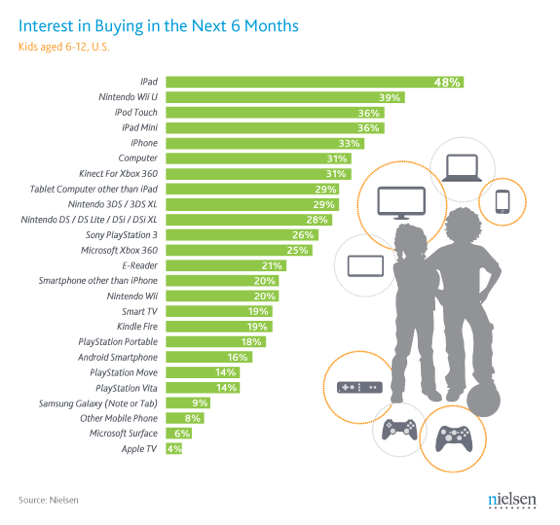 Approximately half the children surveyed expressed interest in the full-sized iPad (up from 44% last year), and 36 percent in the new iPad Mini. The iPod Touch and iPhone are also coveted devices among these young consumers (36% and 33%, respectively). Kids are also likely to ask for dedicated gaming hardware this holiday, with 39 percent excited to own Nintendo’s just-released console offering, Wii U, and 29 percent indicating they want a device from that company’s portable DS family. Microsoft’s Xbox 360 and Sony’s PlayStation 3 also proved appealing, with approximately one-quarter of kids 6-12 saying they want these high definition consoles.

Nielsen also surveyed persons aged 13+ and found the iPad also topped that list. The remainder of the 13+ year old list was less dramatically in favor of Apple than the 6-12 year old group.

In a separate survey of (presumably) adults, Reuters found that one third of U.S. consumers were thinking of buying a tablet this holiday season. Amongst those who wanted a tablet, the iPad was again the most popular with 25% of respondents planning to purchase one. Second and third place went to the Kindle (15%) and Samsung (15%) tablets. Finally, Apple’s new iPad mini came in at 8% amongst respondents.