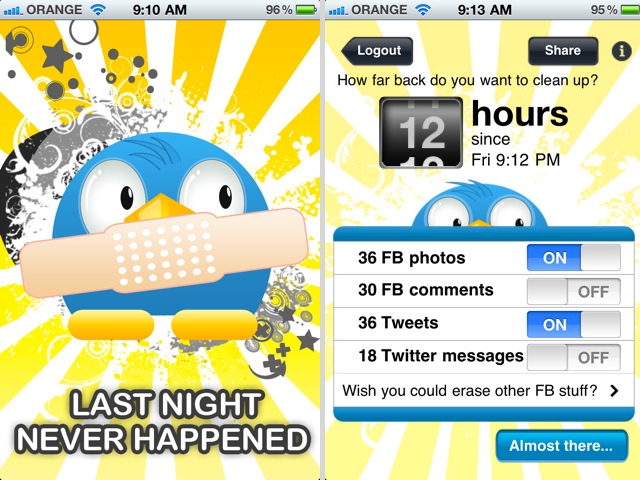 Unwanted and embarrassing posts on Facebook and Twitter can now be erased using the new app, Last Night Never Happened (LNNH). Its creators call it the “Morning-After” app.
We’ve all done it: Publish a post or photo that looks funny during a night of partying, but pretty lousy the next morning.  LNNH, which was recently released for the iPhone/iPod touch by So Soho – 22 seeds, lets you set back the clock and delete unwanted posts.
The app is simple to use.
After logging into your Facebook or Twitter account within the app, answer the question “How far back do you want to clean up?”  LNNH will summarize how many Facebook photos and comments, and Twitter tweets or messages had been published during that time frame.
Decide which ones to delete, and you’re done.
You are now greeted with the appropriate message “Congratulations! Last Night Never Happened.” 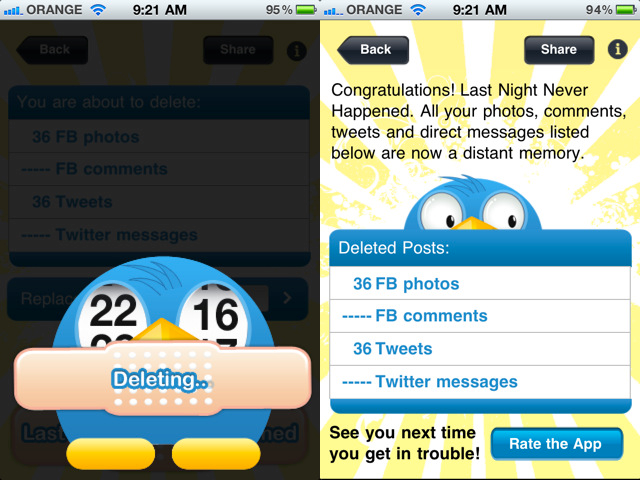 In addition to being extremely practical, LNNH comes with a funny interface that makes the job that much more enjoyable.
Features include:
The $1.99 Last Night Never Happened is available today in the App Store.
0
SHARES
FacebookTwitter
GoogleLinkedinPinterestWhatsapp