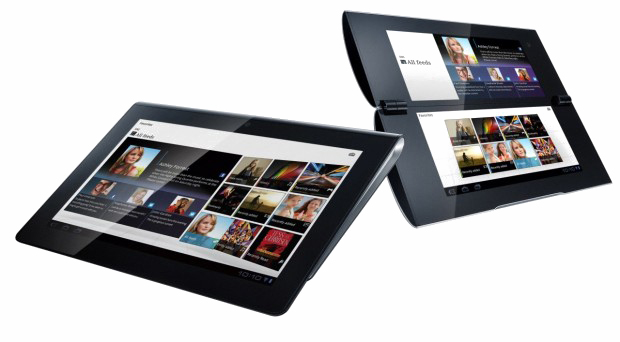 Sony surprised visitors to the Consumer Electronics Show back in January when the company announced its intentions to take second place in the tablet market within a year, despite not having a tablet under its name. But at a media launch in Tokyo on Tuesday, the company announced two new devices that will be coming to take on the iPad this fall.
Identified, for now, by the code names S1 and S2, the new Sony tablets will be powered by the latest Android 3.0 Honeycomb operating system, and will both feature Wi-Fi and 3G/4G capabilities. The S1 will feature a 9.4-inch display and a Tegra 2 processor, with an “off-centre of gravity design.” It will also boast an IR port for controlling Sony’s line of Bravia televisions.
The S2 has two 5.5-inch displays with a foldable design; which can be used independently to display different functions, or together for browsing websites and other tasks.
Sony chose not to reveal any further details about either tablet, disclaiming that “design and specifications are subject to change without notice.” Both devices will be compatible with selected PlayStation games, and are scheduled for a worldwide launch this coming fall.
The S1 certainly looks like a pretty swanky tablet in the picture above, but I’m sure I like the foldable design that comes with the S2. Until we know more details about each device’s technical specifications, it’s hard to determine whether these Sony tablets will worthy adversaries for the iPad 2. However, I can’t imagine Sony would release them if they weren’t strong contenders.
[via AppleInsider]
0
SHARES
FacebookTwitter
GoogleLinkedinPinterestWhatsapp