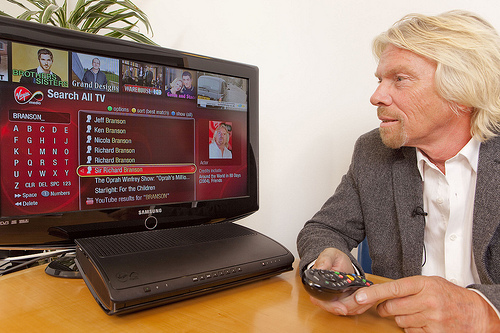 British media magnate and entrepreneur Richard Branson heaped praise on Steve Jobs and his consumer electronics powerhouse Apple, which he says is his favorite brand. Contemplating about a theoretical merger between Virgin and Apple, he said it would be a great fit. As if that weren’t crazy enough,  in a stroke of inspiration the UK billionaire calls Apple a “brilliant global company”that he admires the most. We have a video clip to prove it all right after the break.
Here’s what the chief of the Virgin group with an estimated worth of nearly £3 billion (about 5.1 billion) said in an interview with T3 magazine:

I think Steve Jobs, I hope he gets through his current illness, would be the entrepreneur I most admire. He’s the greatest comeback artist as well, he’s been down and out and fought his way back, and created a brilliant global company. Everything he does is real class. If he wanted to rename his company Virgin Apple, we sure would be happy to merge! A great brand, a great company.

He’s also looking forward to the new iPad 2 as he recently discovered tablet computing. Branson last year beat Rupert Murdoch to the e-publishing punch by releasing The Project, an iPad-exclusive digital magazine. The Project arrived ahead of News Corps.’s The Daily which debuted on February 2. “There’s a possibility that Apple won’t reign supreme indefinitely,” Branson said ofApple’s significant lead in the tablet space.
This video is gold. To receive such a polished testament from an outspoken entrepreneur like Richard Branson is no small thing. It also proves that even Richard Branson, whose empire includes airliner Virgin Atlantic Airways and music label Virgin Records, isn’t resilient to Jobs’ reality-distortion field.
0
SHARES
FacebookTwitter
GoogleLinkedinPinterestWhatsapp