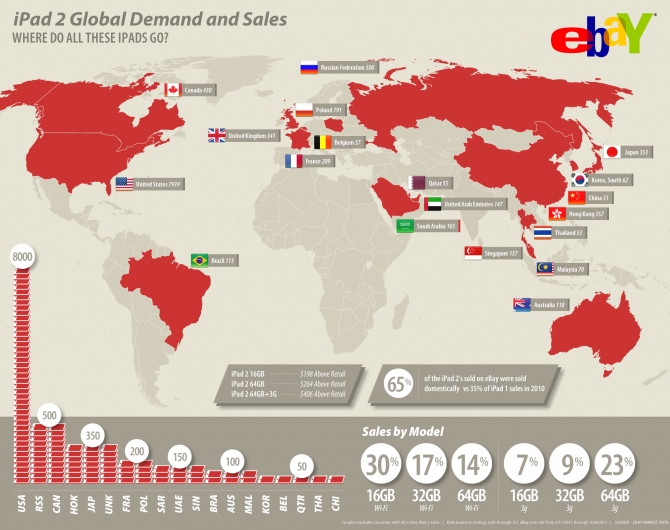 While we’re awaiting Apple’s conference call come April 20 that will shine the light on iPad 2 sales, eBay has just released their official figures relating to a two-week period of iPad 2 activity on their US site, between the launch and international roll out. CNET reports:

Unsurprisingly the hard-to-get tablet has been moving briskly on the service, reaching just less than 12,000 sales in the two-week period between the U.S. launch and the iPad 2′s launch in 25 additional international countries.

About 65 percent of devices went to US residents versus just 35 percent of the original iPads last year. Canada and Russia are the biggest importer of iPad 2s, eBay data suggests, with the latter commanding the highest average mark-up. The average selling price for the 16GB WiFi iPad 2 was $697 on the auctioning site (versus Apple’s retail price of $499), going all the way up to a $406 premium on the flagship 64GB 3G model. There’s more…
Reflecting the last year’s iPad sales structure, the low-end 16GB WiFi and the high-end 64GB 3G models have been the most popular on eBay. Check out the source link for more data, it’s an interesting food for though.
0
SHARES
FacebookTwitter
GoogleLinkedinPinterestWhatsapp