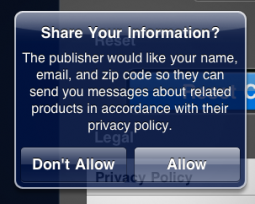 Last week, Forbes writer Jeff Bercovici asked what was it that changed that prompted Hearst and Conde Nast to suddenly agree to Apple’s terms for iPad magazine subscriptions. The answer turned out to be surprisingly simple. Publishers had previously argued that the lack of subscriber information from iPad subscriptions was even a bigger hurdle than the 30% revenue share. Instead of automatically sharing the data, Apple asks individual subscribers to opt in. As it turns out, up to 50% of users agree.

Initially, publishers were worried, reasonably enough, that users would overwhelmingly say no. But they don’t. In fact, about 50 percent opt in.

Apple’s Eddy Cue confirmed the figure according to Bercovici. The author credits the trust in the App Store as the reason for the high opt-in rate.