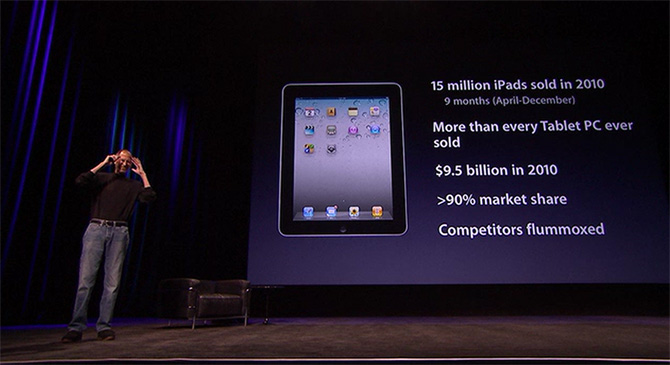 As all eyes are on Apple and its upcoming quarterly earnings that will tell us how many iPads they shipped in the March quarter, ABI Research is out with a new survey focused on the tablet space. The market research company said full-year figures show that Apple owned 85 percent of the tablet market in the entire 2010. Kinda contradicts the above slide claiming “>90% market share” that Jobs put up during the March 2011 iPad 2 introduction.
While taking note of the fact that tablets, netbooks and network-enabled e-readers all surged in popularity last year, ABI Research said tablets aren’t going to replace other computing gear, as some feared:

They expect a bunch of low-cost tablets that will undercut Apple’s $500 entry point and between 40 and 50 million tablets units shipped worldwide in 2011. Other tidbits and a handy chart right below the fold…
Samsung, Apple’s latest frenemy, had an estimated eight percent share of the tablet market last year, which isn’t that bad considering that controversial quote about them shipping two million units into the channel. European tablet vendor Archos which hyped its media tablets grabbed a tiny two percent share, ABI Research noted.
Apple, Samsung and Archos combined controlled a whopping 95 percent of the media tablet market. North America, Europe and Asia-Pacific comprised more than 90 percent of the entire 2010 tablet market, as seen in the below chart showing tablet forecast through 2016. 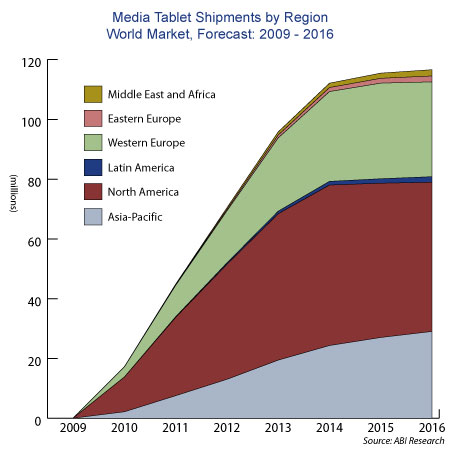