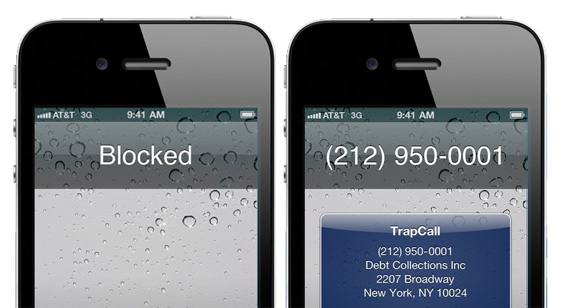 Apple’s review process has gone a long way since the early days when every day would bring a new story about a controversial rejection. It’s rare nowadays that an app would take longer than a couple of weeks to be reviewed, let alone months. That’s exactly what happened to the TrapCall app by Tel Tech Systems Inc. After a whopping 201 days in review, the App Store team has finally approved this app.
The free app requires a paid TrapCall service from five bucks a month. It lets you stop getting harassing phone calls by unmasking blocked and private phone calls. Developers claim it’s the only app in the world that can do this, speculating their workaround of the *67′s caller ID blocking feature is probably why it took Apple so long to review the app. Their product manager Nate Kapitanski told us in an email message:

The whole situation was incredibly frustrating as we had a real hard time even getting a response from Apple after 2-3 months as to what was possibly holding our app up.

What’s really interesting is how the program handles call unmasking…
When you get a call, press the power button twice to decline it and let TrapCall do the unmasking, Within seconds the program sends back the call back to your phone with the number unmasked along with the name and address associated with the caller (when available) via a text message or push notification.
I don’t know about you, but this seems like treading the fine line between Apple’s guideline principles and big no-nos. That said, I wouldn’t be surprised if the app disappears from the App Store. The TrapCall app has a couple of other noteworthy features.
It can transcribe your voicemails into text and send them via text messages, email or push notifications. You can opt to platy a recorded message telling blacklisted callers that your phone number has been disconnected, get timely alerts about missed calls even when your phone is turned off and more.
0
SHARES
FacebookTwitter
GoogleLinkedinPinterestWhatsapp