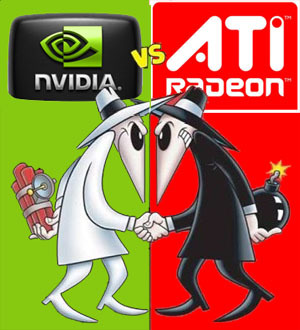 We combed through their announcement to understand how it was that such a claim could be made and why there was no substantiation based on industry-standard benchmarks, similar to what AMD did with industry benchmark 3DMark 11, the latest DirectX® 11 benchmark from FutureMark.

So now I issue a challenge to our competitor: prove it, don’t just say it. Show us the substantiation. Because as it stands today, leading reviewers agree with ushere, here, here, and here that the AMD Radeon HD 6990 sits on the top as the world’s fastest graphics card.

It should be noted that Direct X isn’t going to have much bearing on Mac users, but it is informative and entertaining nonetheless to see these two industry titans slug it out.
It may also explain why Apple moved from NVIDIA to AMD.
NVIDIA has had some build issues that cause recalls of its portable line which may have also soured Apple to NVIDIA products.  They also build a Tegra 2 processor which powers most of the Android phones and tablets that challenge Apple’s iOS for portable supremacy.
0
SHARES
FacebookTwitter
GoogleLinkedinPinterestWhatsapp