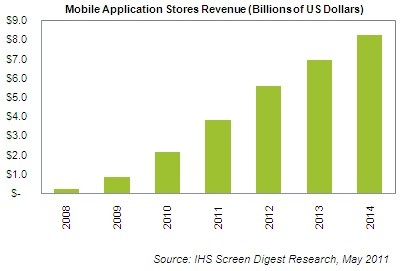 Research firm IHS iSuppli today released its projections for the performance of mobile application marketplaces in 2011, predicting that overall revenues will rise nearly 78% this year to $3.9 billion. Of that figure, Apple’s App Store is expected to snag 76% or $2.91 billion on 63.4% growth over 2010.
To no one’s surprise, the Apple App Store continues to head off all competition. Projected figures for the Apple App Store this year call for revenue of $2.91 billion, up 63.4 percent from $1.78 billion in 2010. Given that Apple devices such as the iPhone, iPod and iPad are the market leaders in their field, the company’s App Store is expected to take in 76 percent of revenue this year and retain 60 percent market share by 2014, despite efforts by the other stores to match Apples ability to monetize its users, IHS believes.

Apple also will lead the way with revenue gained from in-app purchases – or additional purchases made within a paid application, such as bonus game levels – which will serve as a key growth driver for revenue up to 2014.

Android is expected to continue its surge this year with nearly 300% growth to become the second-largest app marketplace after the App Store, but Android’s projected revenue of $425 million will still fall far short of Apple’s nearly $3 billion figure. Research in Motion’s BlackBerry App World and Nokia’s Ovi Store fill out the top four with expected revenues in the $200-300 million range.

Looking further ahead, IHS iSuppli sees the app download market reaching $8.3 billion in 2014, more than doubling the projected 2011 performance. Apple is still projected to maintain a majority share of the market, albeit at a slightly lower 60% share. Still, that performance would put Apple’s App Store revenue at $5 billion in 2014.