Apple has quietly added a new notes feature to its curated apps in the iOS App Store. Apps chosen for Editor’s Choice and App of the Week now come with App Store Notes, which offer a quick description of the app. For example, here’s the new note feature for Might & Magic: Clash of Heroes:

Clash of Heroes has it all: epic storytelling, a wonderful blend of style and substance, and a spectacular battle system. This strategy-puzzler is genre-defining and an absolute must-play effort from the creators of Sword & Sworcery EP.

The App of the Week, Gesundheit, which is currently offered for free in the iPhone App Store, features a similar description. Some other apps, such as those found in the “New and Noteworthy” and “What’s Hot” sections of the App Store also have App Store Notes, though not all of the apps in those sections have the new notes. 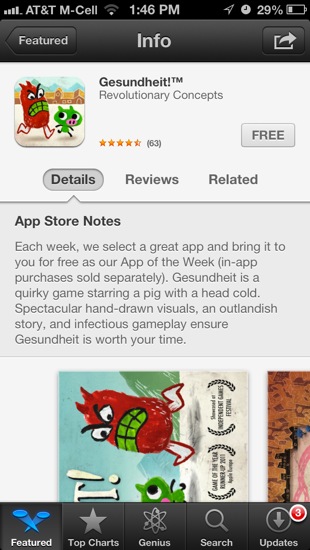 Six of 24 New and Noteworthy apps on the iPhone have notes, while the rest do not. Only two apps, Temple Run 2 and Momonga Pinball, on the What’s Hot have notes included.

App Store Notes might be trickling out to all of Apple’s selected apps, or may be reserved for those that are the most popular. At this point in time, it is unclear what criteria Apple is using to determine which apps are furnished with notes, or if it is a feature that will roll out to all curated apps. The new app notes are only visible in the iOS App Store, and do not show up in the desktop version of iTunes.

Update: App Store Notes first appeared back in December, for the apps that Apple selected as the best of the year. The feature now appears to be rolling out more broadly to other curated App Store sections.