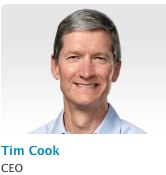 Apple’s Board of Directors has elected to modify the award of restricted stock that Tim Cook received after being promoted to CEO in August 2011. The modification, made at Cook’s request, changes the award of 1,000,000 restricted stock units — originally supposed to be awarded in two lump sums over 10 years — to a more performance-based compensation system.

A restricted stock unit, or RSU, is a form of compensation valued in terms of company stock, but the stock is not issued at the time of the grant. Instead, the recipient gets shares of stock at a later date, generally only if they are still employed by the company.

According to a filing with the SEC today, the Compensation Committee of the Apple Board of Directors approved the amendment of the award from August 2011, though the amendment does not change the fair value of the grant as of the day it was rewarded.

The Committee intends for future stock awards to Apple executives officers to be performance-based and Cook will lead by example. However, though normal performance-based compensation normally has both an upside and downside, at his request, Cook’s award will solely have a downside component.

Under the adopted modification, Mr. Cook will forfeit a portion of the 2011 CEO equity award, which was previously entirely time-based, if the Company does not achieve certain performance criteria. While the Committee generally believes that a performance-based award should have both a downside and an upside component, at Mr. Cook’s request, the modification does not contain an upside opportunity for overachievement of these criteria. As a result of implementing a modification with only downside risk, the Committee has determined that a portion of the original grant should vest earlier than originally scheduled. This modification will not change the award’s original value for accounting expense purposes.

As a result of the changes Cook will receive at least 672,877 shares of Apple stock by the end of the award in 2021, with the possibility of 1,000,000 shares total if Apple continues to outperform its peers. The Form 8-K filing that Apple filed with the SEC today containsadditional information about the modifications to Cook’s award.