If past iPhone sales are anything to go by, Apple is set to move a whooping hundred million iPhone 5 units. In other words, a fifth-generation iPhone will match sales of all previous models combined, helping Apple maintain a healthy 20+ percent market share in smartphones. The assumption is based on the above chart from Asymco that outlines monthly sales for all four iPhone models, approximated based on actual quarterly sales divided over the months according to the number of days available. So far, each iPhone generation doubles on the previous.
We also know that iPhone demand usually outstrips supply because Apple is selling these things as fast as they can make them. That being said, one only needs to look at historic sales data to “build up a model of production ramps and look for patterns of growth.” This leads us to the following conclusion…
Based on that data, we can approximate that iPhone 5 could sell about a hundred million units before it’s succeeded by a sixth-generation model. That’s just an assumption, of course, albeit a valid one because it stems from reasonably accurate predictions based on past sales data. Asymco summs it up best:

They also mention a prediction calling for half a billion new smartphone users buying smartphones in the next two years. Another interesting tidbit: Assuming the iPhone 4 sells for at least one or more quarter, it should move between 60 to 65 million units in total. 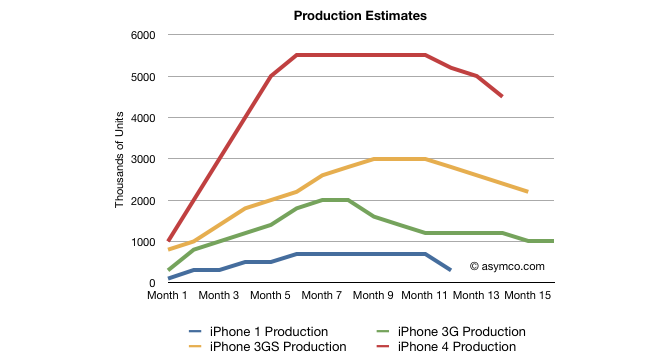