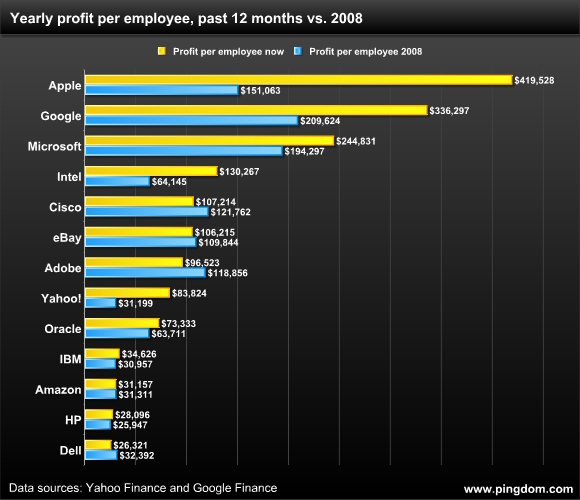 That Apple zoomed past Microsoft in terms of profits is also a reflection of their relatively high yearly profit per employee. That’s the inevitable conclusion based on a research note by analytics firm Pingdom, sourced from public Yahoo! Finance data. The survey looked at the profit-per-employee metric for several tech brands that are publicly traded on NYSE and NASDAQ, including Google, Intel, Microsoft, Hewlett-Packard and others.

In 2008, Google was leading this list, but now Apple has surpassed it by quite some margin. This isn’t because it’s not going well for Google, but rather because it’s going spectacular for Apple.

So, what can we learn from this data?
An Apple employee has earned the company about $420,000 in profits over the past twelve months. This compares to about $336,000 for a Google staffer, $245,000 per Microsoft employee and about $130,000 for an Intel employee.And because the profit-per-employee metric is relatively independent of a company size, “it’s easy to compare companies of different sizes”, Pingdom noted. To put things into perspective, Apple has 46,600 employees versus 89,000 for Microsoft and 26,316 for Google. Yearly profit at Amazon was a little over $31,000 per head while Hewlett-Packard’s employees were worth to their bosses just $28,096 a pop. In other words, an HP employee is worth to its company one fifteenth of its Apple counterpart even though the former employs barely seven times more folks than Apple. Talk about productivity. 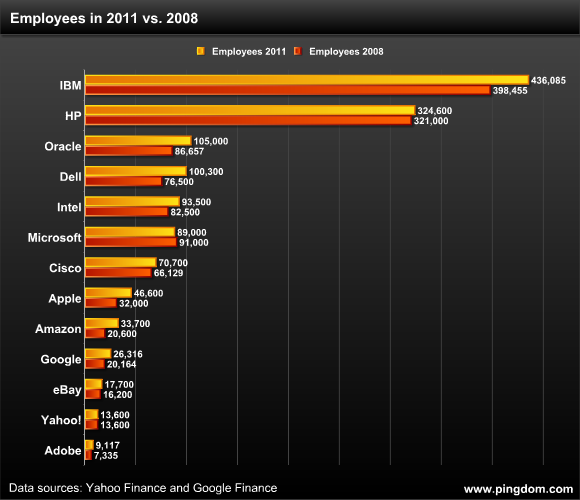