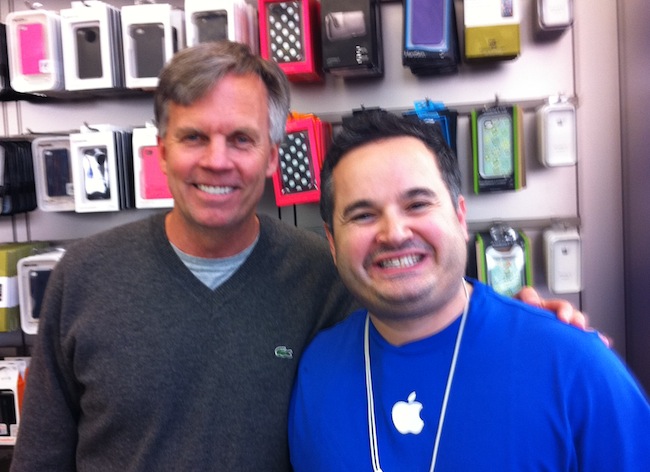 Apple has been hyping up today’s iPad 2 launch since its announcement last week with its numerous newsletters, video guided tours, etc. Now it’s launch day and it could be fairly said that Apple disappointed a few. Signs of shortages occurred as early as this morning when the Apple online store opened with iPad 2s shipping in 3-5 days. Then an hour passed and it was 5-7 days for all models, and an hour later it turned in 2-3 weeks.  But that is expected for online.  People spend a minute at their computer (even if they had to be awaken in the middle of the night to do so).
But what about the people who spent all day in line?
[Editor’s note: Mark is clearly pissed]
I was 9th in line at a major Apple Store in Los Angeles, California – the Century City store. You would think that the ninth person in line would be able to choose any model they wanted after all this hype, but no. By the time it was my turn to pick my iPad 2 (tickets came at 4:45, not the promised 3:30) both the Verizon and AT&T white 64 GB models were sold out. [Editor’s note: Boo Hoo] Apparently Apple store are very short on supply of those models.
Businessweek profiles the group that was ahead of me in line.
If you know that you are short on supply of some models, why would you let the first 7 people in line grab them? It’s unfair. The logical decision would be to limit the constrained models to one per person. As a matter of fact, number 7 (gray marketer) in line at this store was able to snatch 6 iPads (by bringing friends into the line 10 minutes before launch)- all GSM 3G models.
This particular Apple Store waited until 15 minutes before the doors opened to tell the line waiters which iPads they couldn’t get. I don’t think people who waited in line for 10 hours would be happy to hear they can’t get the one they want.
The issue does not stop there. At about the 20-30 person in line mark, this Apple store was completely sold out of 3G models. There were black WiFi-only models available and a few WiFi-only white models.  Apple knew how much stock they had.  They could have told the people in the rear to go home – they weren’t getting an iPad today.
This particular store is not alone. The Glendale Galleria store in California sold out of all their iPad 2s within 45 minutes of opening their doors (thanks, Michael K.). According to multiple reports via Twitter, users were unable to choose the model they wanted. Apple, if you’re going to hype up a launch make sure that you have plans worked completely. Be sure to share your story in the comments.
0
SHARES
FacebookTwitter
GoogleLinkedinPinterestWhatsapp