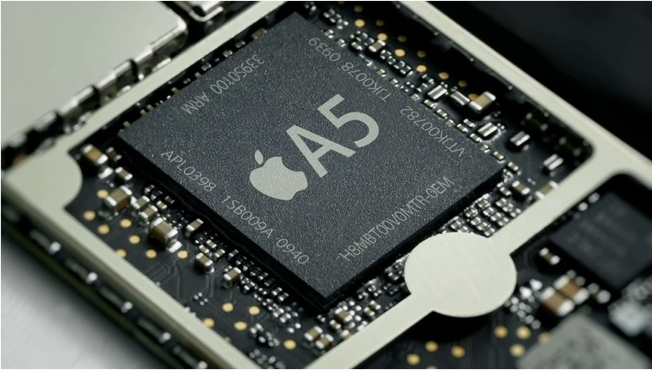 The iPad 2′s A5 processor not only is a speedy, dual-core chip, but also works to provide nine times the gaming performance of its predecessor, A4. So, what’s Apple to do for their best-selling gaming phone? Give it the A5 chip with remarkably better gaming performance. We have already discovered, in the iOS 4 SDK, that Apple is bringing the A5 chip to the next iPhone, and now we have heard Apple is going to push this gaming performance and speed as one of the next-generation iPhone’s major marketing points.
Apple isn’t taking the next iPhone’s A5-power lightly.  They already have select developers working on versions of their iPhone applications that take full advantage of the next-generation iPhone’s speedier and much more powerful hardware. These developers, seemingly from high-level gaming outfits, have been given what is essentially an iPhone 4 but with an A5 processor instead of an A4. The device itself is virtually identical to the iPhone 4, and there is no way anyone can tell it’s not an iPhone 4 based on the phone’s exterior.
The person who chose to share this information with us calls it the ‘iPhone 4S’, though the device itself only has typical Apple prototype nomenclature.  He also shared that the device spends its evenings in a safe in the company’s offices.
To be clear: these prototype iPhone 4S devices are not necessarily the next-generation iPhone. These phones are simply prototype units for developers to get ready for the new phone, rumored to be launching in September. The next-generation iPhone may end up looking just like the iPhone 4 (iPhone 3G-iPhone 3GS sort of thing) but we cannot confirm this. If the next iPhone does end up looking like the iPhone 4, we would assume that Apple would pack in more than just an A5. Probably an 8 megapixel camera, a world phone Gobi chips, and a few other things to spice up the package.
The operating system running on these phones is a version of iOS 4 that supports the next-generation hardware, and this may be why we found the iPhone 5 with an A5 chip in the iOS 4 SDK at all. If past history repeats itself, the fifth-generation iPhone will ship with Apple’s fifth-generation mobile software, in this case iOS 5. iOS 5 will be announced at Apple’s WWDC conference in early June with a rumored launch in September of this year. If anything, this news backs up claims that the fifth-generation iPhone will have an A5 and that Apple is taking gaming very seriously.
0
SHARES
FacebookTwitter
GoogleLinkedinPinterestWhatsapp