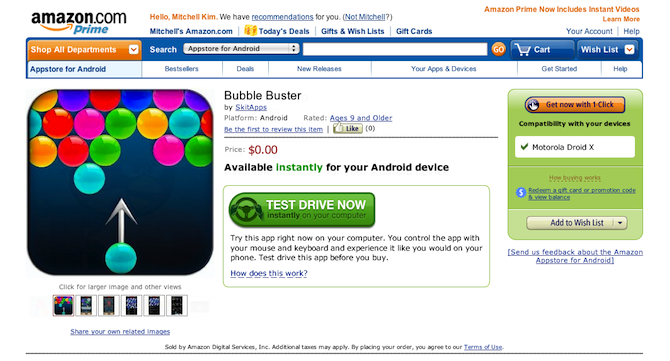 Amazon’s online bazaar for Android software opened for business a week ago and today a useful new feature went live. The call it Test Drive and it lets you sample apps before buying – in your desktop browser. No such thing exists neither on Google’s own Android Market nor Apple’s App Store. It works like magic, really. You just visit the Amazon Appstore on your desktop, select an app and hit the “Test Drive now” button.
Up pops a new window that’s basically a full-fledged Android operating system virtualized in the cloud. You can test the chosen app here, but also use the virtual machine to browser the web using Android’s virtual browser, listen to music, browse image galleries and more. It’s a stunning example of the cloud power leveraging Amazon’s Elastic Compute Cloud technology, the online retailer explains:

Clicking the “Test drive now” button launches a copy of this app on Amazon Elastic Compute Cloud (EC2), a web service that provides on-demand compute capacity in the cloud for developers. When you click on the simulated phone using your mouse, we send those inputs over the Internet to the app running on Amazon EC2 – just like your mobile device would send a finger tap to the app. Our servers then send the video and audio output from the app back to your computer. All this happens in real time, allowing you to explore the features of the app as if it were running on your mobile device.

I’m inclined to believe Apple is already hard at work on copying this neat feat, though more likely as part of iTunes rather than in Flash…
In addition to this Amazon-specific try-before-you-buy feature, Google’s Android Market gained last year a cool option to beam purchased apps to all your authorized devices with a click of the mouse. Apple has neither, for now. The rumor mill is sending mixed signals about an alleged cloud iTunes service.
App Store items are now visible on the web and there’s nothing technically precluding Apple from adding a cloud-based iPhone Simulator layer to try our apps in a browser. Speculating further, should they utilize an OnLive-like interactive video streaming, we might be able to test drive even high-quality games in real-time.
0
SHARES
FacebookTwitter
GoogleLinkedinPinterestWhatsapp