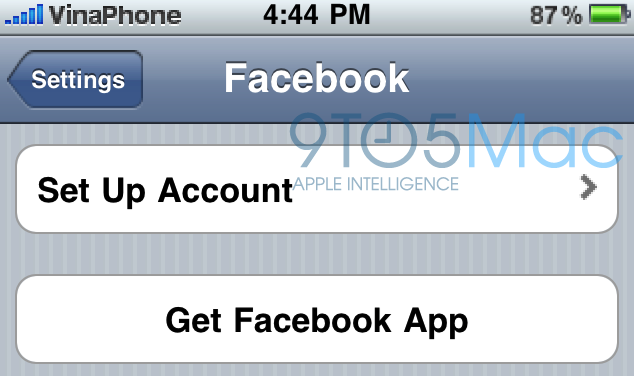 Out of everything revealed in yesterday’s white iPhone 4 prototype leak, a small settings pane titled ‘Facebook’ stuck to us the most. The first thing that came to mind was that iOS 4 was supposed to include some Facebook integration. It’s known that Apple and Facebook were working together on Ping throughout 2009 and 2010 – when Apple was also developing what was then called iPhone OS 4 – and now we have heard that Facebook integration really was in the cards for iOS 4.
Apple was planning to include Facebook integration into iOS’s photos application. We have been able to confirm Facebook video uploading directly from the photos app with SDK evidence, and we have also heard that Facebook photo sharing was planned. One thing Apple and Facebook never planned on integrating were Facebook.com features like the news feed. That is proven by the screenshot provided to us by Tinhte from their iPhone running a ‘test-version’ of iOS 4. There is a button that takes you to the Facebook App Store page. 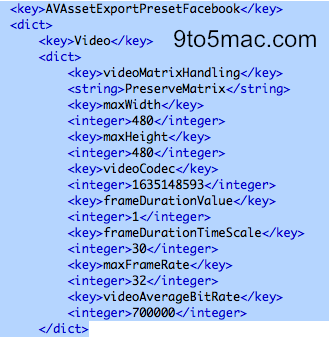 Apple was also planning to integrate Facebook into the iPhone’s phone application. Facebook contact linking in iOS’s contacts applications was discovered last year. Business Insider also reported that iOS Facebook contact syncing was in the works in addition to Facebook messaging. Perhaps the settings panel you see above was to be a system-wide login for Facebook, separate from the main App Store app for contacts, photos, video uploading, and messaging integration in iOS. Apple also patented social-networking/Facebook integration: perhaps this is what we’ll be seeing system-wide.
We have no idea as to whether or not Apple and Facebook’s potential iOS integration deal fell through, like the Ping deal, but we do know it was planned and it would have been awesome. It’s obvious, though, that Apple didn’t want to scrap social features for their mobile platform. That’s where Photo Stream comes in. Photo Stream, as we were first to detail, is sort of like a combination of Facebook and Instagram photo uploading and sharing. It’s also built right in the photos application, like the Facebook integration, so it’s very easy and convenient for the user.
0
SHARES
FacebookTwitter
GoogleLinkedinPinterestWhatsapp