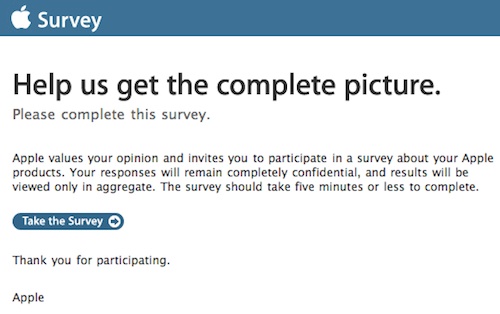 Several MacRumors have informed us in recent days that they have received email invitations to join “Apple Customer Pulse”, a program designed to allow customers to provide survey feedback about their product purchases to Apple.
Apple values your opinion and invites you to participate in a survey about your Apple products. Your responses will remain completely confidential, and results will be viewed only in aggregate. The survey should take five minutes or less to complete.

According to one of the readers who received an invitation, the program allows users to receive up to two surveys per month to assess their usage of and thoughts on Apple products on an ongoing basis. 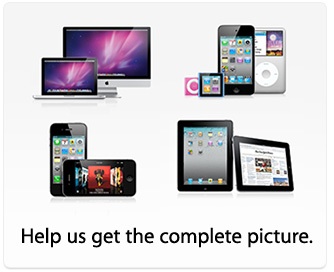 Apple has occasionally reached out to customers for survey feedback on their purchases, but this new program appears to be a more extensive, ongoing market research project for the company. The Apple Customer Pulse site is being administered by Socratic Technolgies, a San Francisco-based market research firm that has worked with other tech companies such as Adobe to gather customer input.

According to Whois database information, the applecustomerpulse.com domain was registered in late January, although the site did not appear on reporting services such as Netcraft until last month. The domain is registered to MarkMonitor, the branding company that Apple routinely uses for such purposes, and the administrative contact is Apple’s Ken Eddings, who has appeared on many such listings including the one for me.com that revealed Apple’s plans for a transition from the company’s .Mac service to the current MobileMe. The new survey site is, however, hosted on Socratic’s servers and not Apple’s.
0
SHARES
FacebookTwitter
GoogleLinkedinPinterestWhatsapp