Apple has updated its Apple Store app [App Store] with support for Siri, and the ability to email Passbook enabled gift cards to friends via the app. However, despite being in the release notes, neither the gift card feature and Passbook support appear to be enabled yet. 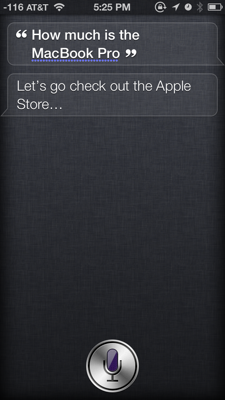 – Buy new gift cards and email them to friends and family right from the app. These gift cards are easily integrated with the new Passbook app (U.S. only, iOS 6 required).

Asking Siri things like “How much is the MacBook Pro?” routes users directly into the Apple Store app, generally to the section they’ve asked about. This adds to Siri’s app-related abilities; on Monday it was reported that in iOS 6.1, Siri would support movie ticket purchases via Fandango.

The Apple Store app is available via the App Store. [Direct Link]