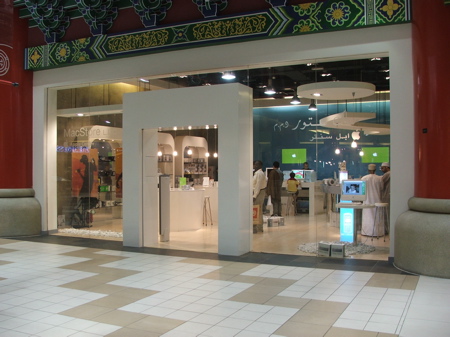 Currently, Apple shoppers must visit AppleCenter in Dubai
According to Stuff Middle East, Apple is the final stages of opening an Apple Store in cash-drenched Dubai.  The Store – whether it is officially an ‘Apple Store’ or not, the distinction is dubious– will be a store within a store of Richard Branson’s Virgin Megastore.  It will be staffed by Apple geniuses/employees, however and will retain the Apple Store “look and feel”.

The store, in Dubai’s Mall of the Emirates, will be 100 per cent Apple, we’re told, complete with Apple staff and know-it-all Geniuses. It’s a real boon for Apple-lovers in the UAE, who in the past have had to deal with extra-long waits for Cupertino’s latest toys or suffer the hugely-inflated prices on the grey market. Bad news for other manufacturers though, who have no doubt capitalized on Apple’s lackluster presence in the region.

Apple has indeed been staffing-up on its retail employees for just such a move.  Just in time for iPad 2s.
Branson has also been working on an iPad magazine which might just be the best put out by a billionaire this year.
0
SHARES
FacebookTwitter
GoogleLinkedinPinterestWhatsapp