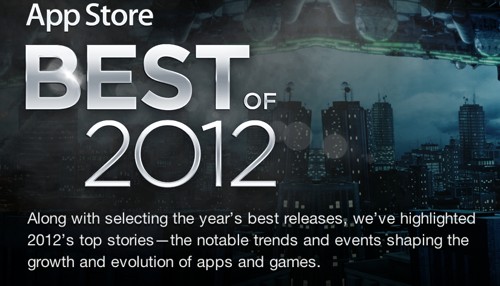 Here are some of the notable winners for 2012:

For the first time in two years, no photography apps made it in to the top listings. 2012 also marks the first year that an Entertainment app was given an editor’s choice award. As always, during the end of the year wrap up Apple highlights games and apps from a wide variety of categories, so it’s well worth skimming the list for hidden gems.

Beyond the top-level awards for music, movies, TV shows, apps, books, and podcasts, Apple is featuring a number of other awards and Editors’ Choice picks across various genres and categories for the various content types.