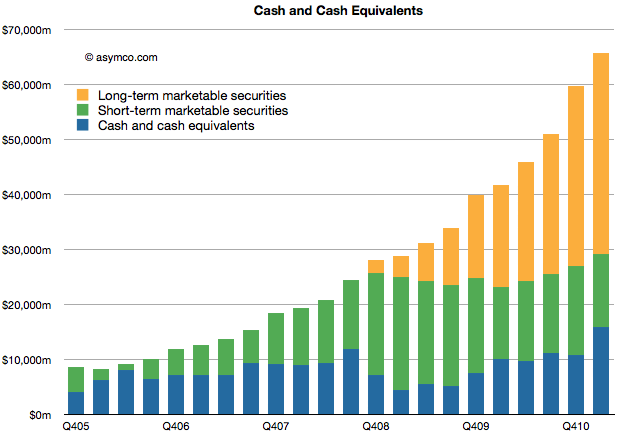 Apple ended its most recent quarter with nearly $66 billion in cash, increasing its war chest by an astounding $6.1 billion in just three months. Their cash pile is worth more than the combined market capitalization of Nokia, Research In Motion and Motorola Mobility – or half of Google’s enterprise value – explains Asymco’s Horace Dediu:

The funds are big enough to place Apple’s CFO office in the top 100 largest fund managers in the world and larger than any hedge fund manager. If Apple had no revenues, the current cash would sustain operations (SG&A and R&D) for over seven years, or until the middle of 2018.

Matter of fact, Apple’s funds have grown more than tenfold in the period between the fourth quarter of 2005 and the latest quarter. Most of it isn’t so-called risk capital, the author explains, adding that if you owned $100,000 of Apple stock,“$19,000 of that would be cash and only about $80,000 would be ‘at risk’ capital”.

Oh, and more thing – Apple’s cash growth in the March quarter was so substantial that if you added component pre-payments back, the cash increase would match Motorola Mobility’s market cap. Not bad for a company that was on the verge of bankruptcy just fifteen years ago, don’t you think?