Apple has launched the newest version of its annual “12 Days of Christmas” holiday app for European and Canadian iTunes users. The free app, which is available for the iPhone, the iPod touch, and the iPad, provides free content each day from December 26 to January 8.

You and your friends can download a fantastic selection of songs, music videos, apps, books and TV episodes for free. Each download will only be available for 24 hours. Get our 12 Days of Christmas app to make sure you don’t miss out.

Don’t have an iPhone, iPad, or iPod touch? Don’t worry. Come back December 26 to download gifts from your computer.

Apple’s 12 Days of Christmas has been a long running tradition in Europe, and has existed in a modified form in Canada for several years, but the Canadian program has now been folded into the main app. Unfortunately, due to regional licensing restrictions, Apple is unable to offer the same promotion in the United States. 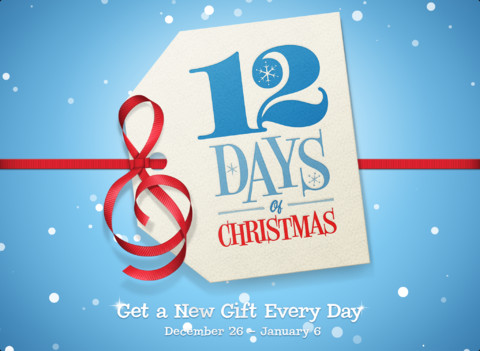 Last year, gifts included episodes of The Big Bang Theory and Mad Men, music videos and songs from Kings of Leon, and games like Diner Dash and Fishing Kings.

The 12 Days of Christmas app can be downloaded for free in the Canadian and U.K. App Stores, as well as those for a number of other European countries.