Panic, the developers behind apps like Coda and Transmit, spent some timedisassembling the Lightning Digital AV cable that allows iOS devices like the iPad mini and the iPhone 5 to output HDMI to televisions.

The company discovered that, like its Lightning to 30-pin brethren, the Digital AV adapter is considerably more complicated than it would appear. Among other discoveries, Panic found an ARM chip and 256MB of RAM inside. 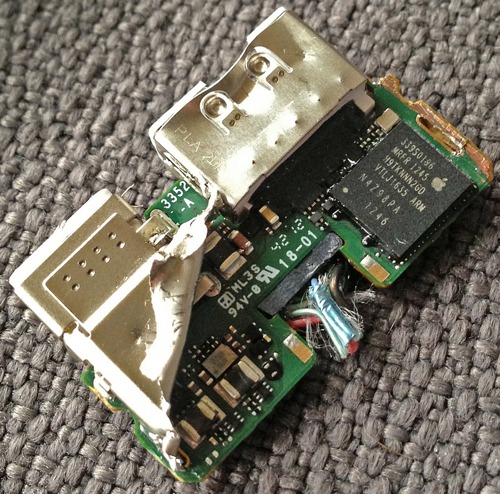 There are a lot of questions. What OS does it boot? @jmreid thinks the adapter copies over a “mini iOS” (!) from the device and boots it in a few seconds every time it’s connected, which would explain the fairly lengthy startup time for video out. Why do this crazy thing at all? All we can figure is that the small number of Lightning pins prevented them from doing raw HDMI period, and the elegance of the adapter trumped the need for traditional video out, so someone had to think seriously out of the box. Or maybe they want get as much functionality out of the iPad as possible to reduce cost and complexity.

Panic conjectures that for some reason the Lightning port isn’t capable of outputting raw HDMI — something that should give an extremely high quality image — and instead uses a form of AirPlay to output video, delivering a lower quality video signal.