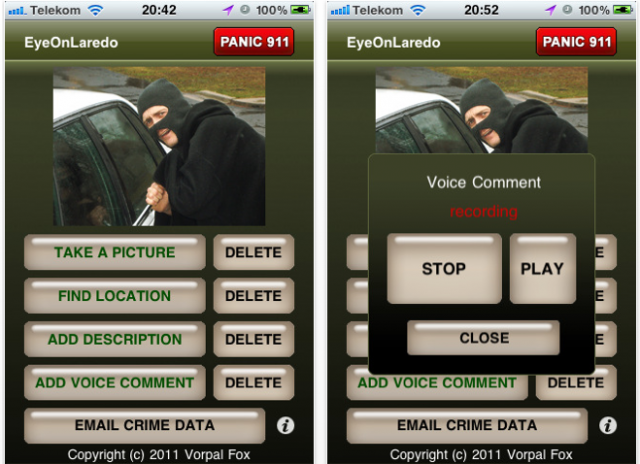 Some Texas residents can now report crime or suspected illegal activity directly to police from their iPhones.
Called Eye on Laredo, the app was made available gratis in iTunes March 23 and deemed suitable for anyone over the age of four.
Local Sheriff Martin Cuellar is billing the app as the 21st century upgrade for the neighborhood watch program, though it sounds a little more like digital vigilante.
“People can report a direct and safe burglary, auto, drug sales, suspicious activity, gangs and terrorism among other crimes, ” Cuellar said. He also noted that concerned citizens can report about any illegal activity they want in order to have “quiet neighborhoods to live in.”
And that last part makes me as wary of this app as the Homeland Security suspicious activity reporting app, or apps like Crime Tips.
It’s easy to imagine people reporting things like suspected illegal immigration or child abuse for anyone they don’t like, just to create trouble.
One of the few reviews on the iTunes store about the Laredo app highlighted what could be another problem, both legal and social:
“How can there not be a reward system?” writes a user going by the name of Ram Bueno. “There is no incentive to literally stick your neck out and take a picture of a crime in progress.”
Developers Vorpal Fox launched a base app called iSpotaCrime in 2010 that can be customized for local police forces.
0
SHARES
FacebookTwitter
GoogleLinkedinPinterestWhatsapp