Facebook will update its Facebook Messenger app later today, adding two significant new voice-related abilities, reports The Next Web. The first will allow Facebook users to record a voice message to send to friends in addition to the standard text and photo messages.

The second is potentially more significant — though is currently in limited beta testing for Canadian iOS users only. Facebook users will now have the option to make a VoIP phone call from one user to another.

Facebook has also said it will also begin the beta testing of a new VoIP calling feature within its iOS Messenger app, allowing users to establish a peer-to-peer connection and make calls without making a dent in their call allowance (although it will use existing data plans).

The only drawback is that voice calls (messages are available to all) will be available to Canadian users of the iOS Messenger app at launch.

To use the service, Canadian users will be able to log into their Messenger app, open a conversation with the person they want to call, hit the ‘i’ button in the top-right corner and selecting ‘Free Call.’ To send and receive calls, users will need to have the latest version of the app that is available today. 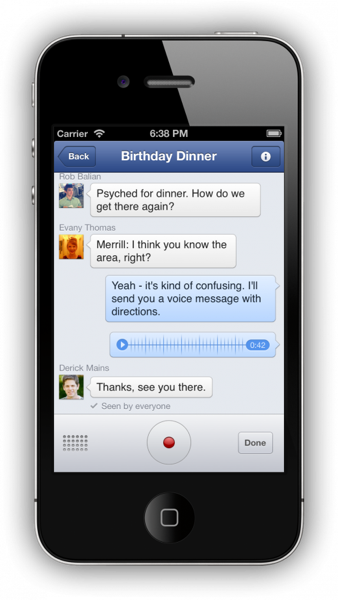 Facebook’s efforts create a calling system that can potentially reach its more than 1 billion users, providing a massive competition to other VoIP services like Skype.

A previous version of this article said it was the Facebook iOS app that was updated. It is the standalone Facebook Messenger app that gained the new voice features.