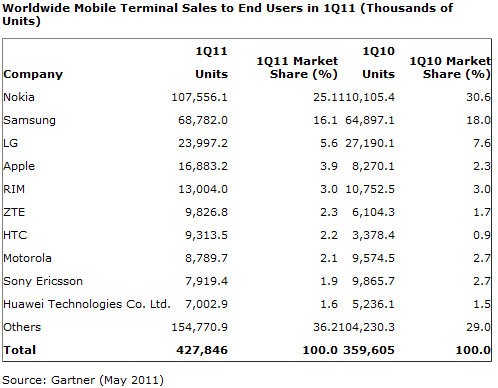 Gartner is out with their first quarter 2011 mobile phone market survey. The results bode well for both Apple and Google as both tech giants grew their respective share of the smartphone market estimated at 100.8 million quarterly units, almost double the 54.5 million units shipped in the year-ago quarter. Smartphones are eating dumphones’ lunch, too, accounting for almost one quarter (23.6 percent) of the 427.8 million quarterly handsets, an 85 percent annual increase.
Apple’s global handset market share is 3.9 percent based on sales of 16.89 million iPhones, up from 2.3 percent a year earlier. California-based team beat Research In Motion (13 million units), now ranked fifth, and is well ahead of first-tier handset vendors Sony Ericsson (7.92 million units), Motorola (8.79 million units) and HTC (9.31 million units). Samsung (68.8 million handsets) and Nokia (107.56 million phones) lead as the world’s #2 and #1 cellphone vendors, respectively.
While Apple doubled iPhone sales from the year-ago quarter, LG, Motorola and Sony Ericsson stumbled. Apple is now chasing LG – which sold nearly 24 million handsets during the quarter – for the title of the #3 cellphone maker globally, which is no small feat knowing Apple avoids cheap dumbphones and only sell high-end devices. How did Apple and Google do in the smartphone segment?
Predictably, Android was the leading smartphone platform in the first quarter of 2011. Google controlled 36 percent of the market, an astounding growth from just 9.6 percent in the first quarter of 2010. Nokia is the biggest loser as Android smartphones collectively outsold Symbian-driven smartphones, 36.3 million versus 27.6 million. As a result, Symbian surrendered a significant portion of its market share and now controls 27.4 percent of the smartphone market, way down from 44.2 percent a year earlier. The iOS platform had 16.8 percent share in the first quarter of 2011, a modest increase over 15.3 percent in the year-ago quarter. This means Android is eating everyone’s lunch except Apple’s.
RIM’s downfall continues as the BlackBerry maker went from the 19.7 market share in Q1 2010 down to 12.9 percent market share in the first quarter of 2011. Microsoft was slaughtered from 6.8 percent to 3.6 percent market share based on an estimated quarterly sales of 1.6 million Windows Phone-driven smartphones. 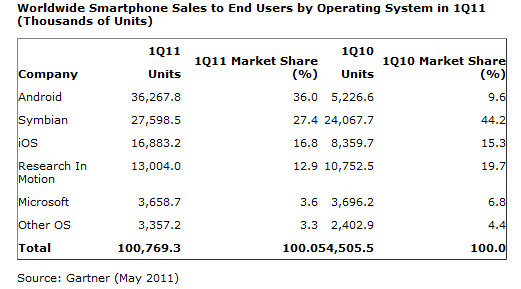