Apple has rolled out a new feature for Newsstand, allowing select publishers to be featured in a new Read Them Here First section, reports TechCrunch.

Hearst is the first publisher to be featured, and its entire catalog is available to subscribers several days before the print editions hit newsstands, and before its magazines hit other platforms like Amazon’s Kindle Fire. 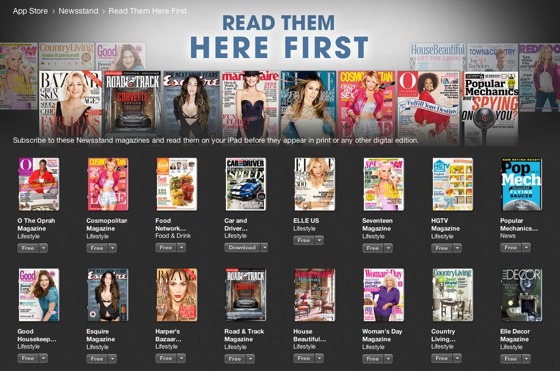 The exclusive arrangement varies by individual publication in terms of how far in advance you’ll be able to get the various Hearst titles compared to in print and from other online storefronts like Amazon’s Kindle marketplace, but each will be available at least a few days in advance, I’m told. Existing subscribers will get early access, as well as those signing up for the first time.

The exclusive publishing window is a nice perk for potential subscribers and iPad owners, though it seems unlikely that getting a magazine a few days early would, on its own, sway potential tablet purchasers to the iPad.