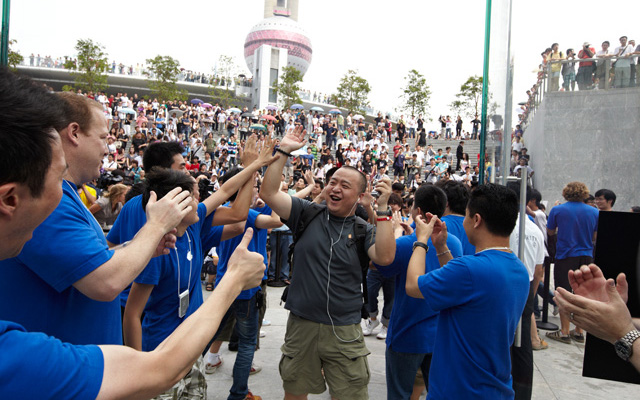 It should surprise no-one that Apple is poised for a huge growth in China. It’s the 1.3 billion people market, folks. Yes, Apple had been neglecting China for years. That changed when iPhone came along, providing Apple with financially sound incentives to launch retail operations in China, including the latest spectacular glass tower in Beijing’s Pudont district.
Four Chinese stores are just the beginning as Apple put to work a plan calling for an aggressive retail expansion. Three store openings are scheduled for Shanghai and up to 25 retail outlets for the entire country. That’s just tip of the iceberg. China is a potential gold mine poised to boost Apple’s shares by 60 percent in the next nine months. Read on…
A recent Alphawise/Morgan Stanley survey tells us that the iPhone tops the China’s desirability charts when it comes to 3G-enabled smartphones, with 53 percent respondents saying they would buy the handset if price were no issue.
Although high price, gray market and limited carrier availability are being consistently singled out as the biggest contributors to slow iPhone sales in the country,  there’s no doubt that even a modest uptick in such a big market would significantly impact revenues. It’s big money out there waiting to be collected, some people think.
Apple’s exploding China business could lead to a $547 stock price by next January, writes author Eric Jackson in a Forbes article. While that may be a stretch, Jackson provides some valid arguments. In its last quarter China business raked in $2.6 billion, ten percent of their $26.74 quarterly revenue. The four Chinese stores are now generating $1.3 billion in annual revenue, prompting Jackson to opine:

I suspect the majority of sales came from just the 4 Apple-owned stores. If that’s true, it would be astounding: 4 stores accounting for at least $1.3 billion in sales in the quarter.  That would mean each store is on a $1.3 billion annual revenue run rate.  A couple of years ago, across its Western stores, Apple was averaging $30 million per year per store in revenues.

That figure is not without merit, but that’s peanuts compared to the projected $32 billion annually when additional 25 stores open for business. Mind you, that’s nearly half the company’s 2010 annual revenue of $76 billion. Apple’s iPhone business will also benefit when Foxconn-owned Cybermart retailer opens about 500 stores in the future, up from 34 locations today, each with an Apple Ship store-within-a-store.
One of my favorite quotes about Apple’s potential in China comes from Leonovo CEO  Liu Chuanzi. He summed it up best saying his company is lucky that Steve Jobs “doesn’t care about China.” He told Financial Times that Lenovo would be in trouble “if Apple were to spend the same effort on the Chinese consumer as we do.” 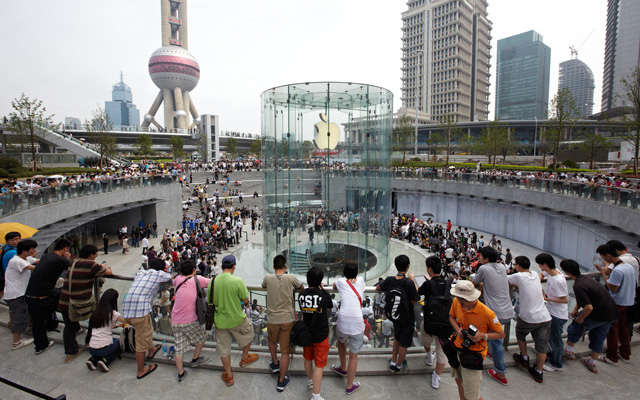