We work very closely with them and we’re constantly looking down the road at what we can be doing relative to future products. I’d go as far as to say Apple helps shape our roadmap. Apple — they push us hard.

No wonder Intel is cozying up to Apple – they would die for an iPhone contract. At the same time, Nvidia’s boss Jen-Hsun Huang is telling the press that Tegra 3-powered Honeycomb 3.1 tablets will overtake the iPad.
Apple and Intel became friends six years ago when the Mac maker dumped PowerPC processors in favor of Intel-manufactured silicon. Their most recent collaboration includes the high-speed Thunderbolt I/O platform and 2011 MacBook Pro and iMac computers that incorporate Intel’s latest Sandy Bridge platform. Let’s not forget Apple ditched Nvidia chips in favor of AMD graphics in those systems. At the same time Nvidia and Intel are increasingly finding themselves on a collision course as Nvidia is developing upcoming processors for desktop computers and laptops. Nvidia calls it the Maxwell platform, the first end-product using Project Denver.
The graphics giant hopes a high-end Maxwell chip will go down in history as the world’s first consumer CPU to run any operating system and applications entirely off a GPU core. At the same time, Intel is taking battle to Nvidia’s (and everybody’s) turf with the announcement of a new 3D transistor tech called Trigate. AMD chief Warren East dismissed this tech as being irrelevant today, but Intel hopes the resulting processors will pave the way for ultra-thin, low-powered mobile devices of the future. 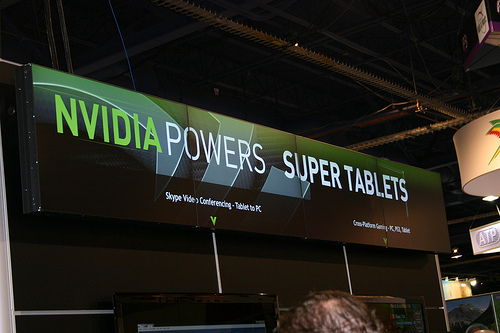