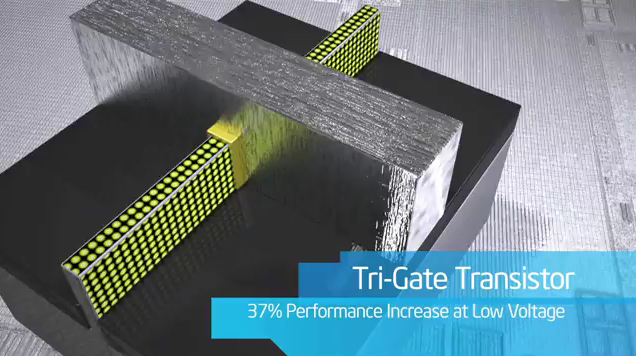 Adamant to keep the Moore’s Law running, Intel on Wednesday announced a new 3D transistor technology that will lead to faster, thinner and more power-savvy chips in smaller packages. Moreover, these new processors code-named Ivy Bridge will be fabbed on Intel’s latest 22 nanometer process. The chip maker is promising a 37 percent jump in speed with low voltage compared to their 32nm planar transistors.
That and less than half the power consumption when at the same performance as 2D planar transistors on 32nm chips. These advancements will enable new innovations across a range of gadgets, from the smallest handhelds to powerful servers, Intel says. Take it from CEO Paul Ottelini:

Intel’s scientists and engineers have once again reinvented the transistor, this time utilizing the third dimension. Amazing, world-shaping devices will be created from this capability as we advance Moore’s Law into new realms.

What does it mean for you and me? Check it out in the video below the fold…
For starters, future Macs packing some serious processing oomph. Apple is, however, unlikely to switch to Ivy Bridge chips for iOS gadgets because the whole purpose of Apple’s acquisitions of fables companies was to gain expertise to design own silicon in order to distinguish their mobile products with unique hardware features not available to competitors. Now, speculative reports claimed that Intel could become a foundry for Apple’s Ax-branded processors used in iOS devices. Disregarding the fact that Intel develops, engineers and manufactures only its own chips, some folks are calling for the company to think different in this case.
The reasoning is that winning over the hottest company in mobile would up Intel’s credibility in this space and instantly give them access to millions of iOS devices sold each quarter. For Apple, this would secure access to the world’s best manufacturing capabilities at a scale they need. Plus, Intel won’t be a competitor like Samsung as the company makes chips, not devices.
Here’s more info from Intel’s press release about the new 3D transistor technology:

The 3-D Tri-Gate transistors are a reinvention of the transistor. The traditional “flat” two-dimensional planar gate is replaced with an incredibly thin three-dimensional silicon fin that rises up vertically from the silicon substrate. Control of current is accomplished by implementing a gate on each of the three sides of the fin – two on each side and one across the top — rather than just one on top, as is the case with the 2-D planar transistor. The additional control enables as much transistor current flowing as possible when the transistor is in the “on” state (for performance), and as close to zero as possible when it is in the “off” state (to minimize power), and enables the transistor to switch very quickly between the two states (again, for performance).
Just as skyscrapers let urban planners optimize available space by building upward, Intel’s 3-D Tri-Gate transistor structure provides a way to manage density. Since these fins are vertical in nature, transistors can be packed closer together, a critical component to the technological and economic benefits of Moore’s Law. For future generations, designers also have the ability to continue growing the height of the fins to get even more performance and energy-efficiency gains.