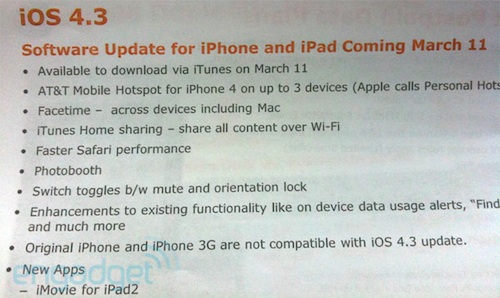 Engadget posts a purported internal AT&T sales document sharing details of Apple’s iOS 4.3 launch scheduled for next Friday, March 11th. According to the document, the personal hotspot functionality included in the update, which the carrier has already announced that it will support will be limited to three connected Wi-Fi devices.
According to this here slide, which details a bit of insidery AT&T information about the impending release of iOS 4.3, Ma Bell’s iPhone 4 will have its Personal Hotspot restricted to use with just three devices. Just about every MiFi / mobile hotspot device we’ve ever seen — including Verizon’s iPhone 4 — has supported five WiFi devices, but unless AT&T pulls a 180 here, it’ll be limiting its iPhone to just three connections.

You can share your connection with up to five devices at once over Wi-Fi, Bluetooth, and USB – with up to three of those connections using Wi-Fi.

Apple elaborates even further in a footnote on the page, revealing device limitations for each of the connection methods: