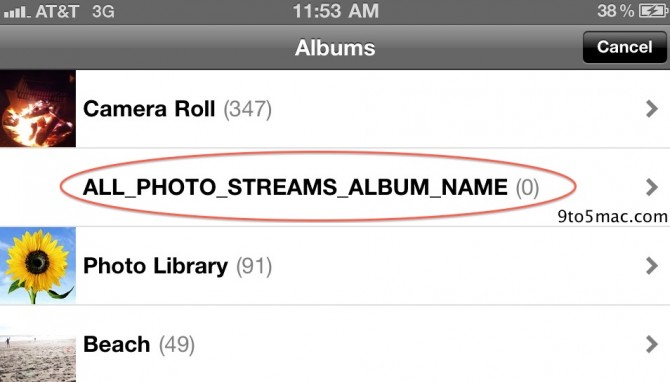 We already told you that Apple has a photo-based social component called Photo Stream up its sleeve and now glimpses of this feature are appearing in customer’s iPhones. 9to5mac reader Mario Piombo spotted references to Photo Stream albums in his iOS 4.3 iPhone 4. The references are hidden from the user’s plain view of Photos.app and were discovered via a third-party application, which allows the user to select photos from their library for editing.
It looks like users will be able to setup Photo Stream albums in Photos.app just like they can make playlists of songs in iPod.app. These Photo Stream albums will then be able to be streamed to specified groups of people like we detailed back in January:

From the looks of different alerts and plists, it appears that Apple will let iPhone users set up “Photo Streams” that friends could “subscribe” to. Also, it looks like there will be some privacy preferences related to this, so you can choose who is allowed to view your “Streams.” With Photo Streams, you will also be allowed to “invite” other users to view your pictures as you take them and upload them to a service. This service looks like it is connected to MobileMe, and we speculate that “Media Stream” can be directly connected to “Find my Friends.”

Basically, Photo Stream will be the easiest way to share photos taken or stored on your iPhone with your friends. No need to post them online – via Facebook, Twitter, Flickr, etc. – just stream the albums you choose to your family and friend’s photos.app. An older version of iPhoto for Mac included a similar feature called Photocast. Photocast allowed a user to send a photo album to another user. That photo album would then appear as an album in the friend or family member’s iPhoto library. We’re thinking Apple is going to be doing the same thing with Photo Stream.

Since Photo Stream references have been found in iOS 4.3 we speculate that Apple pulled the feature at the last minute to include as a component of a greater social offering in iOS 5. Also, as we noted before, this Photo Stream feature may be MobileMe specific. Mario’s iPhone is connected to MobileMe, Photocast required MobileMe (then .Mac), and our SDK findings referenced MobileMe. Hopefully this comes with the free, revamped MobileMe service.