RBC Capital Markets analyst Mike Abramsky today issued a new report sharing his expectation that Apple will handily beat market expectations for its quarterly earnings report set for next week. Citing strong sales of the MacBook Pro and MacBook Air, as well as very strong iPad sales, Abramsky expects Apple to post revenue of $24 billion and earnings per share of $5.75 for the quarter. 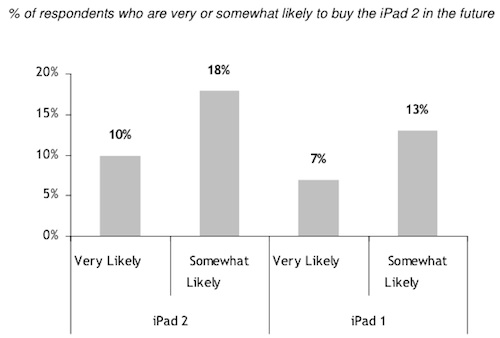 The research note also included the results of a proprietary survey of over 2000 respondents in the United States conducted March 14-23, interestingly revealing 40% higher demand for the iPad 2 than in a similar survey conducted for the first-generation models in May 2010. According to the survey, 28% of respondents are either “very likely” or “somewhat likely” to purchase an iPad 2, up from 20% for the first-generation iPad last May.

The survey also demonstrates a shift in the “sweet spot” for customer demand when it comes to Wi-Fi-only models. A February 2010 survey ahead of the launch of the original iPad saw the low-end 16 GB Wi-Fi iPad registering as most popular among those planning to purchase an iPad, with the 32 GB model in second place and the 64 GB model in third place. The new survey for the iPad 2 shows that customers are finding the greatest affinity for the mid-range 32 GB model among the Wi-Fi options, followed by the 16 GB model and finally the 64 GB model. 3G-capable models follow the same trend seen in last year’s survey, with those customers looking most frequently to the top-end 64 GB model. 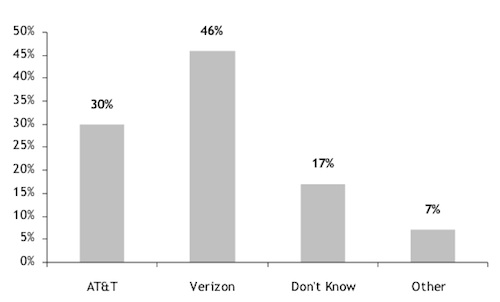 Carrier preferences for 3G iPad 2 customers
With Apple now offering both GSM (AT&T) and CDMA (Verizon) 3G models of the iPad 2, it is also interesting to look at the balance in customer demand between the carriers. According to the new RBC survey, 46% of 3G iPad 2 customers plan to use a Verizon iPad while only 30% of customers plan to utilize AT&T’s service.
0
SHARES
FacebookTwitter
GoogleLinkedinPinterestWhatsapp