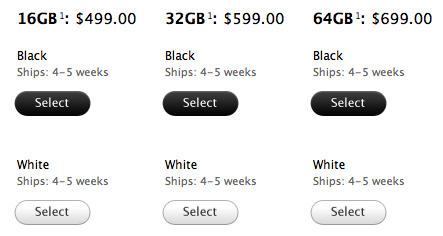 This is already becoming insane: the iPad 2 is now shipping in 4-5 weeks from the Apple online store. That means if you order an iPad 2 from the online store right now it won’t show up at your door step for over a month. That’s about 11 months before the iPad 3 or less if Apple has a fall surprise up its sleeve.
Apple’s own retail stores are also facing shortages with many customers walking out with a model they didn’t particularly want or nothing at all. Apple’s online store originally quoted a 3-5 day ship time but that jumped to 5-7 days to 2-3 weeks all within a few hours.
Shipment times then jumped to 3 weeks to a month a day later, on March 12th, and now we’re at 4-5 weeks (for all 18 models). At this point, if you want an iPad 2, you’re better off calling up and visiting your local Apple Store. Apparently stores are opening up a bit early tomorrow and are getting in some new iPad 2 shipments.
0
SHARES
FacebookTwitter
GoogleLinkedinPinterestWhatsapp