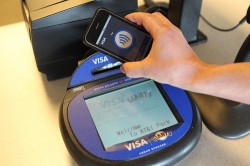 China Times reports [Google translation, via Macotakara] that Taiwanese chip firm Chipbond has been selected to provide a number of components for the iPhone 5S, including the touch display driver as well as chips to support fingerprint sensor and near field communications (NFC) capabilities. The report suggests that Apple will use the fingerprint sensor functionality to enhance the security of NFC features such as mobile payments.

NFC has been a long-standing rumor for the iPhone, and evidence supporting its inclusion for the iPhone 5 failed to pan out amid claims that the device##Q##s design wouldn##Q##t even accommodate an NFC antenna. Some have suggested, however, that Apple could have novel plans up its sleeve for deploying NFC within the mostly metal case of the iPhone 5 that will presumably carry over to the iPhone 5S. Still, specific claims of NFC for the iPhone 5S have been essentially non-existent until now.

Last July, it was reported that Apple was deliberately moving slowly into the mobile payments field that could tie in closely to NFC technology. For the time being, Apple is focusing on its Passbook app to offer a digital wallet of passes, coupons, and loyalty cards, although it is easy to see how its functionality could be expanded to include mobile payments and NFC.