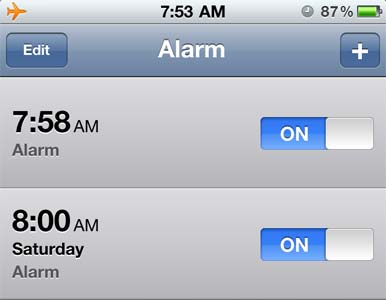 Macworld summarizes findings first reported by Engadget. Apparently a bug in the iPhone clock app prevents non-recurring alarms from properly triggering on New Years day.
I was able to confirm this after a couple of false starts. For the bug to show itself, your iOS device must actually tick over from 11:59 p.m. on December 31, 2010 to 12:00 a.m. on January 1, 2011.

The work around for now is to set up the alarm as a recurring event. 9to5Mac claims that the problem corrects itself after January 3rd. In the meanwhile, be aware if you use your iPhone as your alarm clock.

Apple spokesperson Natalie Harrison confirmed to Macworld that Apple is aware of the problem. “We’re aware of an issue related to non repeating alarms set for January 1 or 2,” Harrison said. “Customers can set recurring alarms for those dates and all alarms will work properly beginning January 3.”
0
SHARES
FacebookTwitter
GoogleLinkedinPinterestWhatsapp