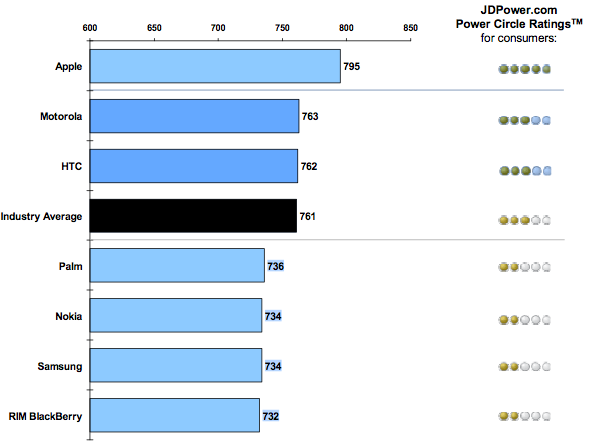 Today, J.D. Power and Associates announced that Apple’s iPhone is once again the smartphone that customers are most satisfied with. This is the fifth consecutive year in which Apple has attained the award and the iPhone earned a score of 795/1000.
Even though this is 5 points shy of Apple’s 800/1000 score from 2010, Apple still came out over competitors Motorola (763) and HTC (762). The J.D. Power survey judges the following categories:

According to the survey results, the iPhone performs “particularly well” in physical design, ease of use, and the operating system (iOS). Apple’s latest iPhone – iPhone 4 – has been the site of much controversy, mostly having to due with antenna issues.
Apple is expected to unveil a new iPhone – “iPhone 5″ in June, for a June/July launch, with faster internals and a similar design to the iPhone 4.
0
SHARES
FacebookTwitter
GoogleLinkedinPinterestWhatsapp