A pattern is emerging in smartphones. Think about it, the same scenario has been playing out over and over in every territory where Google and Apple battle for supremacy. Apple first wows the market with its iPhone. Then, Google brute forces its way into the game and eventually takes the lead thanks to countless Android handsets in all shapes, sizes and price points, carried by virtually all wireless operators. Japan, however, is an indication of a new pattern that has iOS and Android forming a duopoly that squeezes out entrenched players, upping the barrier to entry.
In the latest survey of the Japanese market by MMI Research Institute reported by Bloomberg Businessweek, Android posted an incredible 2,000 percent year-over-year growth, capturing 57 percent of the country’s 2010 smartphone market versus 38 percent for Apple’s handset (as big as anywhere) – a notable decline for the iPhone’s 72 percent share from a year earlier and also a catastrophic loss for other platforms.

Shipments of Android phones rose to 4.91 million units in the year ended March 31, Tokyo-based MM Research said in a statement today. That compares with sales of 250,000 units, or 11 percent of the market, a year earlier when devices running Google’s software started to be widely available in Japan.

Apple shipped 3.23 million iPhones in the country in the last fiscal year, all sold excursively via Softbank. The combined 57 percent share for Android plus 38 percent for iPhone leaves little room for Nokia and BlackBerry maker Research In Motion. Both brands have been reduced to the Others category with a minuscule five percent market share. Is this a sign of things to come? Read on… 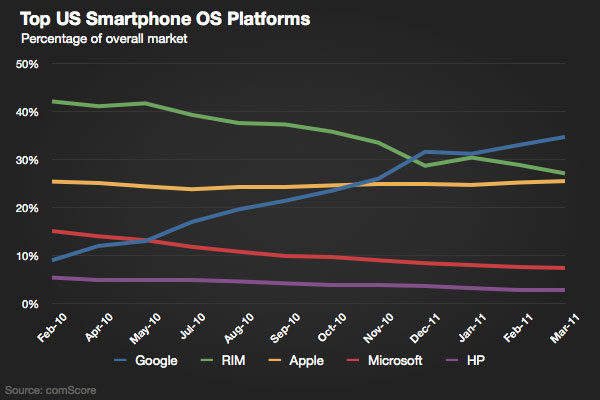 The Android/iOS duopoly might and will spill over from Japan to other countries. The writing has been on the wall for some time. Take comScore, which tracks 75 million smartphone subscribers in the US. They found out the iPhone’s been holding onto its 25 percent market share, with Android growing at the expense of RIM and Nokia. The BlackBerry maker’s share fell sharply to 27.1 percent in the first three months of 2011, down 4.5 percent sequentially. Just a year ago RIM had a healthy 40 percent of the US smartphone OS market share. Microsoft (7.5 percent) and Palm (2.8 percent) also saw their market share halved from a year ago.
The latest IHS iSuppli survey from yesterday shows Apple growing its position among top handset vendors. Major Verizon Wireless customers like Motorola, Samsung, LG and HTC all slipped during the first quarter amid the Verizon iPhone introduction. Globally, Apple is now chasing Nokia for the title of the world’s #1 smartphone maker. Nokia probably won’t be the leading smartphone vendor by the end of 2011. Their shipments contracted by 14.5 percent and Apple is now trailing them by just 5.7 percentage points (see the chart below). IDC and others echo these findings, too.