Facebook today announced that it has added iTunes Store digital gift cards to its Facebook Gifts platform, making it easier for users to send iTunes credit to their networks of Facebook friends. 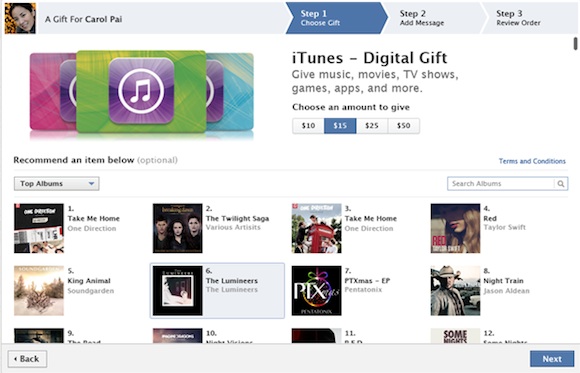 AllThingsD notes that the partnership offers increased visibility for the iTunes Store and gives Facebook a part of what is currently estimated to be a $260 million business in iTunes Store gift cards for third-party retailers.

Per Apple’s last 10-K, the company generated $7.5 billion from the iTunes Store during fiscal year 2012. Industry sources say that more than $2 billion of that revenue comes directly from iTunes gift cards. Sources also tell us that existing retailers who sell iTunes gift cards (like Best Buy, Target and the like) usually keep around 13 percent of each gift-card dollar sold.

So that adds up to around, say, a $260 million-dollar market size for physical iTunes cards split among participating retailers, of which Facebook will now be an active participant. That pie is small compared to Facebook’s overall revenue ($3.71 billion in 2011), but another digital product with less overhead and high demand is definitely a win for Facebook’s Gifts department.