“This year’s Zune hardware is Windows Phone 7″, says the Zune head.
The Zune team head debunked yesterday’s report about the Zune’s demise. Dave McLauchlan, senior business development manager for Zune, insisted that the iPod didn’t kill the Zune in a semi-official statement posted to the AnythingButiPod forums. He reminded that “all consumer electronics products have a lifespan, and the Zune HD is 18 months old” while promising new apps and games.
“This year’s Zune hardware is Windows Phone 7,” he said. McLauchlan wouldn’t confirm whether new standalone Zunes are in the works. The writing has been on the wall for a long time. But even if Microsoft kills off the Zune, the brand will be alive and kicking and here’s why.
It all started with a Bloomberg article citing people “familiar with the decision” who asserted that “tepid demand” prompted Microsoft to cease Zune development, Instead, the story goes, the company would re-purpose the Zune software for Windows Phone devices. A Microsoft spokesperson kinda refuted the story by saying they have “nothing to announce about another Zune device.” Cut-throat margins in the MP3 player space and Apple’s choke-hold of the music market made competition tough and the Zune alienated Microsoft’s PC partners anyway.
While the decision to hit the ejection handle doesn’t bode well for Microsoft’s hardware business, Steve Ballmer hinted back in October of 2009 that Zune services will become an integral part of Windows Mobile. The brand will have a far greater visibility and addressable market as a result. Windows Phone owners will soon be able to buy songs and movies carried on Microsoft’s online content store, turning an unlimited streaming offering for fifteen bucks a month – known under the Zune Pass moniker – into a weapon against the iTunes juggernaut.
The fact that even iPod die-hards praise the Zune’s sleek and elegant user interface won’t hurt either. After all, Apple too mimics the iPod hardware experience by preloading iPod and iTunes apps on the iPhone. The Zune store is on par with iTunes in terms of content breadth and quantity. That being said, deploying Zune services on Windows Phones will enable a tighter interplay between the mobile operating system and underlying services, if not hardware. 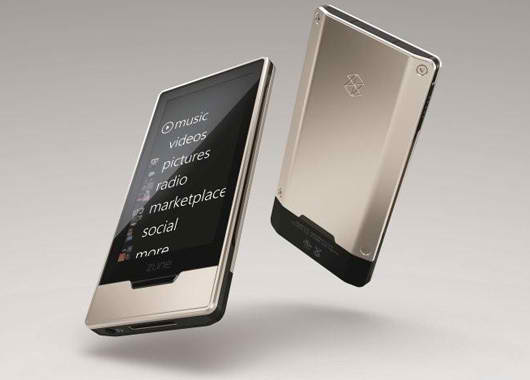