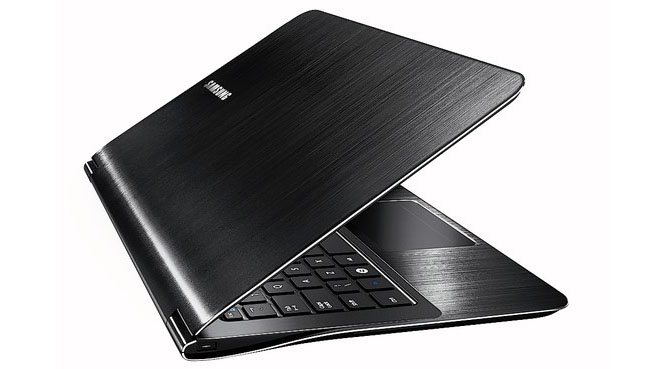 The Wall Street Journal’s tech columnist Walt Mossberg has published an interesting review of the Samsung Series 9 over at the paper’s All Things Digital blog. It’s a stylish, aluminum-clad 13-inch notebook that sports a button-less touchpad, sealed battery and 128GB of flash storage. It’s “a gorgeous” MacBook Air alternative, Mossberg opined, and a showcase of Samsung’s top engineering rather than just a fashion statement.
While the Samsung notebook out-specs the Air in several areas, including a newer and faster Intel processor, backlit keyboard, twice the memory and 30 percent brighter screen, it won’t be for everyone due to its price. The base model costs $350 more than the entry-level 13-inch Air:

Prospective buyers of the Series 9, however, should prepare to pay a lot – more than what even premium-priced Apple charges for the Air. And, based on my tests, I suspect they will see noticeably less battery life than Samsung claims, and significantly less than on the comparable MacBook Air.

He also praised the seven-hour battery on the 13-inch Air versus the Series 9′s battery that falls below four hours in wireless tests (about five hours in normal use):

The biggest difference, in my experience, was battery life. Both companies claim their competing laptops can get up to seven hours of use between charges. But my tests suggest that Samsung falls well short of that claim, while Apple meets or exceeds it.

The Series 9 notebook is the latest example of Samsung throwing down the gauntlet at Apple. Samsung appears to be the only device maker capable of challenging Apple on design, thinness and the overall engineering.
Apple and Samsung currently have an ongoing love-hate affair. The Korean giant is a supplier to Apple (they manufacture A4 and A5 processors to Apple’s blueprints, supply memory chips and touch panels) yet at the sane time competes with its client on smartphones, computers and tablets.
Samsung’s latest strategy – something Jobs seems to have caught wind of – is to let Apple release a product, then try to out-spec it by reducing the battery. At the same time, Apple’s marketing is in overdrive promoting long-lasting batteries on the iPad and MacBook Air as the killer features.

Jobs at the official unveiling repeatedly called the iPad 2′s ten-hour battery performance “legendary.” He stressed how Apple didn’t compromise on battery performance in order to make the device thinner because “we don’t wanna give up on that.”
Another example: At the unveiling of the new MacBook Air in October of last year, he explained why Apple was switching to a rigorous battery benchmarks that provide more realistic figures:

The PC industry’s battery tests sometimes don’t reflect real-world results. We’re moving towards a more stringent tests that really we think are gonna get us much closer to real-world results on battery tests. Even using these more stringent tests, we’re getting seven hours of wireless web battery life. Our previous MacBook Air using the old, more liberal tests, got only five. 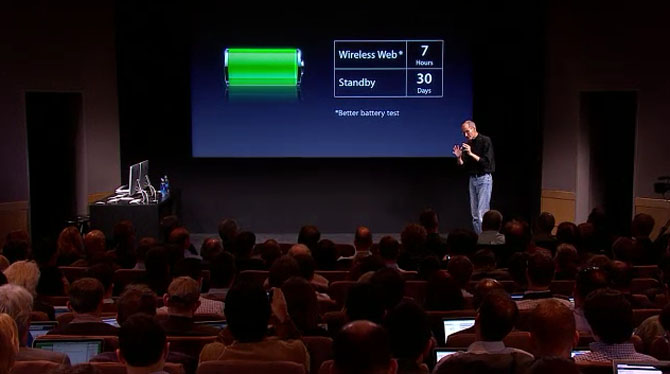