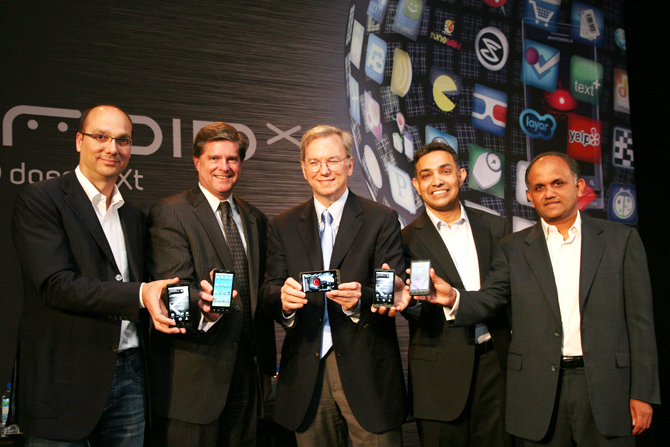 Once partners, soon frenemies? Droid X launch (left to right): Android’s Andy Rubin, Verizon’s John Stratton, Google’s Eric Schmidt, Motorola’s Sanjay Jha and Adobe’s Shantanu Narayen
Motorola’s role in helping put Google’s mobile operating system on the map with Droid-branded smartphones cannot be underestimated. Even though Android has revitalized their phone business, it is now a risk factor for Motorola Mobility, formerly the mobile devices division of Motorola Inc. The company is reportedly developing its own smartphone software to reduce dependency on a single supplier.
They apparently hired a number of former Apple and Adobe engineers with experience in the mobile market, a source “familiar with the matter” told  InformationWeek. This includes Apple’s former head of rich media and applications group Gilles Drieu and former manager of JavaScript development Benoit Marchant. Motorola did not deny such plans beyond re-affirming its Android focus. Jonathan Goldberg, a Deutsche Bank analyst:

I know they’re working on it I think the company recognizes that they need to differentiate and they need options, just in case. Nobody wants to rely on a single supplier.

This is interesting on many levels.
A much bigger hint than these hires, as our reader noted in comments, is Motorola’s $20 million acquisition of Y Combinator startup 280 North last August. Several former engineers worked there, helping develop a JavaScript language and framework similar to Objective-C and Cocoa used for Mac development. As a result, Motorola could find itself in a position to provide developer tools for easy porting of iOS apps to Motorola’s rumored new platform.
Their mobile operating system would be the third major mobile operating system to favor web-based development over native programs which are traditionally limited to underlying platforms. Palm’s webOS started the trend. Research In Motion confirmed its QNX-powered BlackBerry PlayBook tablet will focus on HTML5 apps and last year RIM said it would replace BlackBerry OS with QNX, the software platform they acquired from Harman International a year ago for an undisclosed amount.
At some point smartphones and mobile browsers will be good enough to run HTML5 apps so you won’t notice the difference compared to native experiences. The power of web apps that are written once and work across different platforms is not to be underestimated.
All those 99-cent IM apps, social clients and many, many other programs on the App Store will soon compete with equally flashy HTML5 apps, available free and supported with advertising.
UPDATE: Motorola’s written in and said: ”Motorola Mobility remains committed the Android operating system. We have hired employees with HTML skills to enable the best browsing experience to consumers and our strategic focus on the Android platform has not changed.”
0
SHARES
FacebookTwitter
GoogleLinkedinPinterestWhatsapp