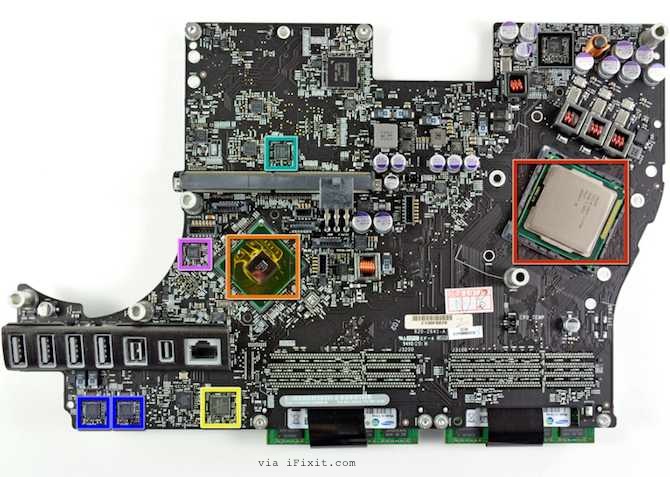 According to TonyMacx86, the mid-2011 iMac lineup integrates the Intel BD82Z68 Platform Controller Hub. Indeed, iFixit’s teardown analysis confirms this.  The Intel Z68 platform isn’t set for official release until May 11th so it looks like Intel is being really friendly with Apple again.
But wait, it gets WAY better…
The Z68 platform has a little surprise:

Intel may have another new series of SSD up its sleeve that it hasn’t told anyone but its OEM partners about. Thankfully, one of its OEM partners – in this case Asrock [Ed: best name evar] – has leaked out word of a “Larsen Creek” SSD series thanks to Asrock’s showing of its Z68 motherboard.
The documentation speaks of Intel’s Smart Response Technology that uses an SSD as a high-speed cache for an HDD. Seagate has explored this sort of hybrid technology in a single device, but soon this cache could hit 20GB with the Intel Smart Response Technology. The slide showing this tech has seen been taken down from Asrock’s servers, but still survives in this Engadget posting.

This means that Apple would likely be using the Intel’s Smart Response Technology in its iMacs, if not with Snow Leopard, perhaps in an update with Lion.  People who order SSD/HDD combo configurations would be able to see the combination as one drive  –which the often needed OS/Application files are stored on the SSD while the larger Media and Documents files are stored on the slower, cheaper HDD storage.
In fact, Apple’s wording on HDD/SSD combos is very curious.

Also, we’ve been hearing from customers that people who order SSD/HDD combos that lead times for these BTO iMacs is a few weeks or more. ”Larsen Creek” SSDs aren’t yet available (or officially even being talked about.)  So, perhaps Apple has to wait for Intel before shipping SSDs of this nature.

In any case, the hardware is there for something pretty special.  We’ll see if Apple has software plans to include this hybrid drive technology in its ecosystem.